Greggy getting attention, her success

Sharks, Greggy making a fool of himself

She is one of Jake's relatives on his mother's side and Greggy's mother. She is usually holding the family reunions of Jake's dragon family on her own private island, off the coast of the Florida Keys. She seems to be wealthy, as she owns an island. Also, she must have married a magical being, since she mocks Susan for having a "non-magical" husband. However, it remains unknown if that man is a dragon, an elf or another kind of magical creature, or even if he is still married to Cathy, as he is nowhere to be seen during the family reunion.

It can be assumed that she doesn't have any dragon powers, since her cousin, Jake's mother, said many times that "it (dragon powers) skipped my generation". Because of her age (apparently similar to Jake's mum) and the close age proximity between her sons and Susan's children (Gregory is one year younger than Jake and Andrew and Haley seem to have the same age), we can deduce she is of Susan's generation and, consequently, isn't a "true" dragon. 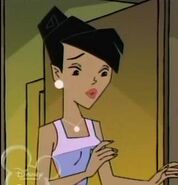