Disney Wiki
Register
Don't have an account?
Sign In
Advertisement
in: Characters, Lady and the Tramp characters, Females,
and 14 more
English

Si and Am (cats)
Aunt Sarah is Jim Dear's aunt and Jim Jr.'s great aunt and the main antagonist in Lady and the Tramp.

In earlier drafts of the first film, Aunt Sarah was written as an overbearing, meddling aunt-in-law, and showed antagonistic feelings towards Jim Dear. She came to the house to see Jim Jr. while Jim Dear and Darling were still at home, and pushed for them to kick Lady out, as she was constantly found guilty of mischief committed by her two cats, Si and Am. Near the end, when Lady was found to be innocent of attacking Jim Jr., Aunt Sarah angrily left after Jim Dear accused Si and Am of being cowards, and was not shown to have redemption in the end.

Conversely in the novelization and comic adaptation by Ward Greene, Aunt Sarah is very remorseful upon finding out that Tramp was protecting the baby and personally drives her nephew to the pound to retrieve the dog.

Having such a deep appreciation for cats, Aunt Sarah rather dislikes dogs, and is very antagonistic towards them, being quick to blame them for any incidents that occur. However, by the ending of the original movie, she proceeded to apologize to Lady and Tramp and offer them some dog biscuits as a consolation gift, implying that she at least developed some respect for dogs, with her in the sequel having a less antagonistic relationship with them.

The novel by Ward Greene and comic adaptation, Sarah is guiltridden upon finding the rat's body and drives her nephew to the pound, even vowing to break every speed limit if it means saving Tramp. [1]

In the film, when Jim Dear and Darling go on vacation, Aunt Sarah is put in charge of Jim Jr. and Lady, to whom she takes an immediate dislike and shuts her out of Jim Jr.'s room when she (Lady) tries to see him. While she is upstairs, her two cats, Si and Am, cause mischief downstairs and wreck the house, claiming it as their own. Although they caused all the trouble, Lady gains all the blame when they pretend that she attacked them and ends up getting muzzled by Aunt Sarah. Luckily, she is able to wriggle out of Aunt Sarah's arms and run away, knowing that she will be safe.

After being transported to the dog pound, Lady is picked up by a guard, who returns her home to Aunt Sarah, who then ties her to her doghouse as punishment for running away. She suddenly spots a rat climbing through a hole in the fence. While she barks at it, Aunt Sarah tells her to be quiet. Tramp hears her barking, and she tells him that there's a rat in the house. He follows it to Jim Jr.'s room and kills it before it can harm him. The loud commotion alerts Aunt Sarah, who notices Lady and Tramp. Believing they want to harm Jim Jr., she locks Lady in the cellar and forces Tramp into a closet. She then calls the pound and has Tramp taken away by the dogcatcher.

When Jim Dear and Darling return home, Aunt Sarah reveals that a stray dog (Tramp) had been in Jim Jr.'s room and that she had him taken to the pound. After hearing Lady barking, they release her from the cellar. Jim Dear realizes that she is attempting to tell them something, and so he and Darling follow her to Jim Jr.'s room, where they find the dead rat. They realize that Tramp had been trying to protect him from it.

Aunt Sarah is not seen again afterward in the film but is mentioned in the ending as having sent Lady and Tramp and their puppies some dog biscuits as an apology.

Aunt Sarah returns in the 2001 sequel. She is first seen in the opening of the film while Jim Dear and Darling are taking a stroll in town, where they meet up with her. She claims she will be attending their Fourth of July picnic, as Si and Am love that holiday. She is later seen at it. Scamp disrupts it by scaring Si and Am (who were hiding in the picnic basket, about to steal the family's chicken) into her arms. He then steals the chicken, determined to prove to Buster that he is a Junkyard Dog. She then watches in horror as the other Junkyard Dogs ruin the picnic. Afterward, she makes no further appearances in the film.

Sarah appears in various comics set after the film. In one story, she rewarded Scamp with dog treats for helping protecting Si and Am.

Aunt Sarah makes a cameo appearance in the House of Mouse episode "Rent Day", where she is seen sitting at a table with Si and Am in a crowd shot.

In this version, her portrayal is more closer to the earlier drafts of the original movie. She is also Darling's aunt instead and has antagonistic feelings toward Jim Dear. Much to her surprise, she is also hired to look after Lady while Jim Dear and Darling take their new baby daughter, Lulu, on a trip to see a relative. After they pick Lady up from the pound and return home, they both tell Aunt Sarah how very unsatisfied they were with how she took care of Lady, and she is sent packing immediately. She is also not redeemed at the end and still shows a huge dislike for Lady and dogs in general.

Aunt Sarah leaving with Si and Am

Taking Lady into the pet shop

Knocked over by Lady, who runs out of the shop

Awakened by the sound of Tramp's battle with the rat

Relieved that Jim Jr. is unharmed

Dragging Lady downstairs to lock her up in the cellar

Aunt Sarah in Lady and the Tramp II: Scamp's Adventure

Aunt Sarah with Si and Am in House of Mouse

An early marquette of Aunt Sarah seen in The Reluctant Dragon 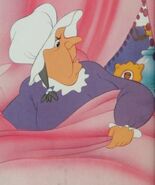