Tom, the boy from Castle Wyvern, appears in New York fully grown and asks Goliath for his help in defeating the Archmage, Macbeth, Demona, and the Weird Sisters on the mystical island of Avalon.

Goliath, Elisa and Bronx accompany Tom to Avalon to stop the Archmage and in doing so find out what happened 1000 years ago. Through a series of flash backs leading from Hudson's final mission as leader against the Archmage, it is revealed that he'd been saved by his future self, setting up the creation of Demona and MacBeth's present roles.

Discovering that his clan's rookery eggs had survived and their children are thriving on Avalon, Goliath enlists their help in finding a way to defeat the Archmage and with their help, resurrects a sleeping King Arthur who resides on Avalon. 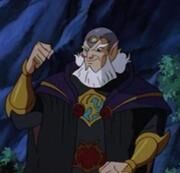 The Archmage on Avalon

Retrieved from "https://disney.fandom.com/wiki/Avalon_(episode)?oldid=4436556"
Community content is available under CC-BY-SA unless otherwise noted.