Start a Wiki
watch 02:26
Avengers: Infinity War - Official Trailer
Do you like this video?

Avengers: Endgame
Ant-Man and the Wasp

“I know what it's like to lose. To feel so desperately that you're right, yet to fail nonetheless. It's frightening, turns the legs to jelly. I ask you to what end? Dread it. Run from it. Destiny arrives all the same. And now it's here. Or should I say, I am.”
―Thanos to Thor and Loki

The film is directed by Joe and Anthony Russo, and written by Christopher Markus and Stephen McFeely. In Avengers: Infinity War, the Avengers which were torn apart from the events of Civil War, are joining forces with Doctor Strange and the Guardians of the Galaxy in order to defeat the powerful Thanos and the Black Order from obtaining the six powerful Infinity Stones and wiping out half of the universe.

The film was actually announced in October 2014 under the title of Avengers: Infinity War - Part 1. The Russo brothers confirmed to return directing with Christopher Markus and Stephen McFeely joined once again to write the script for the film, which had drew inspiration from The Infinity Gauntlet comics by Jim Starlin from 1991 and Jonathan Hickman's Infinity comics from 2013.

In 2016, Marvel shortened the title into Avengers: Infinity War and the decision to turn the film into two-part project was canceled. Filming had begun in January 2017, shooting back-to-back with the sequel at Pinewood Atlanta Studios in Fayette County, Georgia. Additional filming took in Scotland, England, New York City, and the Downtown Atlanta area, and, the film was entirely filmed with IMAX cameras. The film was produced with an estimated budget of $345 million, thus it is one of the most expensive films ever made.

The film was initially meant to be released on May 4, 2018 however the release date was advanced by Marvel.

Avengers: Infinity War premiered on April 23, 2018 in the Dolby Theatre at Hollywood, Los Angeles. The film was released on April 27, 2018 in 2D, 3D, and IMAX 3D. It received largely positive reviews from critics and audiences respectively with praise aimed towards the action sequences, visual effects, the cast, humor, musical score by Alan Silvestri, and the emotional weight of the story although the runtime received some criticism.

Upon its release, the film has broken several box office records with grossing $641 million worldwide and $258 million in US and Canada during its opening weekend setting the highest-grossing openings for both, and was the fastest film to reach to box office incomes of $1.190 billion, becoming the 15th highest-grossing of all time as well as the second highest grossing film of 2018 after Black Panther.

A direct sequel entitled Avengers: Endgame, which was directed by Joe Russo and Anthony Russo and written again by Stephen McFeely and Christopher Markus, was released on April 26, 2019.

Having finally acquired the Power Stone from the planet Xandar after destroying it, Thanos and his lieutenants - Ebony Maw, Cull Obsidian, Proxima Midnight, and Corvus Glaive-intercept the spaceship Statesman which is carrying the survivors of Asgard's destruction. They later extract the Space Stone from the Tesseract, Thor is subdued, and Thanos overpowers Hulk after a brief fight. Heimdall sends Hulk to Earth using the Bifröst before he himself is killed. Loki attempts to stop Thanos, fully acknowledging and re-accepting his Asgardian title at the same time, but Thanos anticipates this and kills Loki. Thanos departs with his lieutenants and obliterates the spaceship.

Hulk crash-lands at the Sanctum Sanctorum in New York City, reverting to Bruce Banner. He warns Dr. Stephen Strange and Wong about Thanos' plan to kill half of all life in the universe; in response, Strange recruits Tony Stark/Iron Man, and they also explain Thanos' plan to him, convincing Stark to attempt to call Steve Rogers/Captain America despite their rift. Before he can do so, Maw and Obsidian arrive to retrieve the Time Stone from Strange, drawing the attention of Peter Parker/Spider-Man. After a battle, Maw captures Strange and tortures him violently, but fails to take the Time Stone due to an enchantment. Iron Man and Spider-Man pursue Maw's spaceship. Banner contacts Steve Rogers via Stark's phone, and Wong stays behind to guard the Sanctum.

In Scotland, Midnight and Glaive ambush Wanda Maximoff/Scarlet Witch and Vision in order to retrieve the Mind Stone in Vision's forehead and Scarlet Witch fails to block them despite her best efforts. Steve Rogers, Natasha Rominoff/Black Widow, and Sam Wilson/Falcon rescue them after Banner's phone call and take shelter with James Rhodes/War Machine and Banner at the Avengers Compound while they think on a solution. Vision offers to sacrifice himself by having Wanda destroy the Mind Stone to keep Thanos from retrieving it. Rogers suggests they travel to Wakanda, which he believes has the resources to remove the stone without destroying Vision.

In outer space, the Guardians of the Galaxy respond to a distress call from the Asgardian ship and rescue Thor, who surmises Thanos seeks the Reality Stone, which is in the possession of the Collector on Knowhere. Rocket Raccoon and Groot accompany Thor to Nidavellir, where they and the giant dwarf Eitri create an enchanted battle-axe known as the Stormbreaker, which appears to be capable of killing Thanos.

On Knowhere, Peter Quill/Star-Lord, Gamora, Drax the Destroyer, and Mantis find Thanos with the Reality Stone already in his possession after brutally attacking the Collector. Thanos kidnaps Gamora, his adoptive daughter, and takes her back to his ship. After failing to both reconnect with Gamora and justify his plans to her, Thanos reveals that he is holding her adoptive sister Nebula captive after foiling her attempt to kill him, and despite Gamora's claims that she doesn't know the location of the Soul Stone, Thanos reveals she, in fact, does, and tortures Nebula until Gamora finally reveals the location of the Soul Stone to save her. Thanos and Gamora travel to Vormir, where the Red Skull, keeper of the Soul Stone, informs him the stone can only be retrieved by sacrificing someone he loves the most. Gamora believes that Thanos has failed in his task, believing he doesn't love anyone, but to her horror, Thanos reveals that he truly does love Gamora, and intends to sacrifice her in spite of this. With a broken heart, Thanos reluctantly kills Gamora, earning the Stone.

Nebula escapes captivity and asks the remaining Guardians to meet her on Thanos' destroyed homeworld, Titan. Iron Man and Spider-Man kill Maw by ejecting him out of his spaceship and rescue Strange. Landing on Titan, they meet Quill, Drax, and Mantis. The group forms a plan to remove Thanos' Infinity Gauntlet after Strange uses the Time Stone to view millions of possible futures, seeing only one in which Thanos loses. Thanos arrives, and explains to Strange his motives. He is justifying his plans of destroying half of the universe as necessary to ensure the survival of a universe threatened by overpopulation, a catastrophe that occurred on his own home planet. The group, soon joined by Nebula, subdues him after a lengthy battle, until Nebula deduces that Thanos has killed Gamora for the Soul Stone. Enraged, Quill attempts to retaliate, allowing Thanos to break the group's hold and overpower them. After Stark is seriously wounded by Thanos, Strange surrenders the Time Stone in exchange for Thanos sparing Stark. Thanos then departs for Earth, and Strange states to the group that "We're in the endgame now".

In Wakanda, Rogers, Romanoff, Banner, Rhodes, Vision, and Wanda arrive, where they reunite with Bucky Barnes/White Wolf before Thanos' armies invade. The Avengers, alongside T'Challa/Black Panther and the Wakandan forces, mount a defense while Shuri works to extract the Mind Stone from Vision. Banner, still unable to transform into the Hulk, fights in Iron Man's Hulkbuster armor. Thor, Rocket, and Groot arrive to reinforce the defenders. Black Widow, Okoye, and Scarlet Witch fight Midnight and kill her, while Banner defeats Obsidian without the Hulk's help, and Glaive is stabbed by Vision before he can kill Rogers. Thanos' army is routed, but Shuri fails to remove the Mind Stone from Vision in time. Thanos arrives and uses the Stones to brutally defeat almost every single one of the Avengers, until Scarlet Witch destroys Vision with the Mind Stone, though not before Vision declares his love for Wanda. However, Thanos uses the Time Stone to reverse the action, and retrieves the Mind Stone from Vision, destroying him once again.

Thor severely wounds Thanos via the Stormbreaker, but Thanos survives the blow and activates the complete Infinity Gauntlet before he teleports away. Half of the population around the universe disintegrates into ashes, including Bucky, T'Challa, Groot, Wanda, Sam, Mantis, Drax, Quill, Strange, and Peter Parker. The broken Stark and Nebula remain on Titan while Banner, M'Baku, Okoye, Rhodes, Rocket, Rogers, Romanoff, and Thor are left on the Wakandan battlefield, shocked and defeated from Thanos' victory. Meanwhile, Thanos rests on another planet and peacefully looks towards a sunset, his goal fulfilled.

In a post-credits scene, in New York City, Nick Fury transmits a distress signal as both he, Maria Hill, and others disintegrate. The transmitter displays a star insignia on a red-and-blue background.

The Disney Wiki has a collection of images and media related to Avengers: Infinity War. 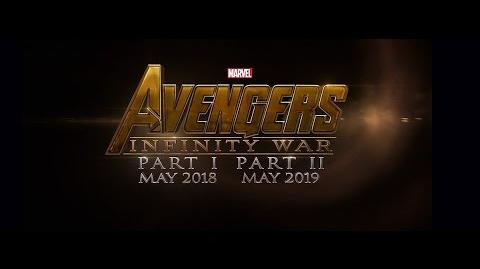 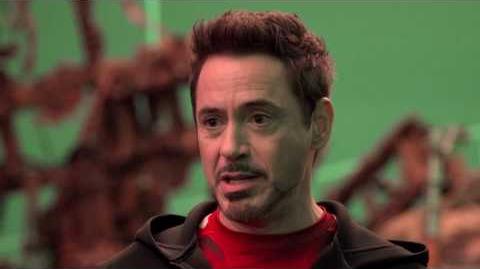 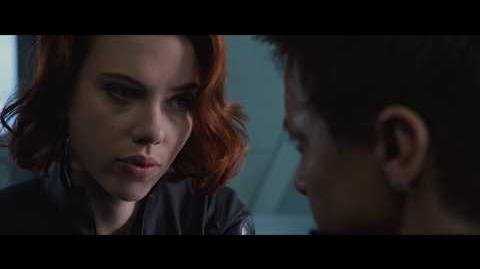 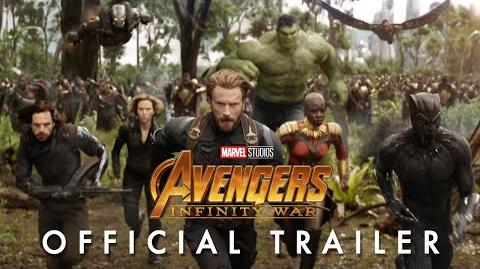 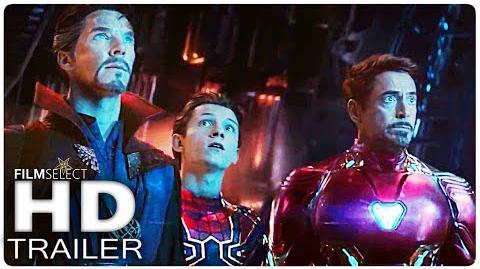 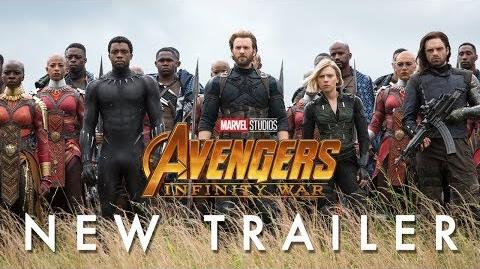 Retrieved from "https://disney.fandom.com/wiki/Avengers:_Infinity_War?oldid=3855744"
Community content is available under CC-BY-SA unless otherwise noted.