Avengers Campus is an upcoming themed land at Walt Disney Studios Park and Disney Parks' second Marvel Cinematic Universe-themed land. This version of the Avengers Campus will be the larger in the world (more than 3 hectares).

It was originally scheduled to open in 2021. However, it was delayed to Summer 2022, as part of Disneyland Paris' 30th anniversary celebration, since the opening was postponed indefinitely following the closure of the park due to the coronavirus pandemic.

On February 27, 2018, Chairman and CEO of The Walt Disney Company Bob Iger announced plans for a 2 billion euro, multi-year expansion for Disneyland Paris alongside French President Emmanuel Macron at the Palais de l’Elysée in Paris. The new development will include a transformation of the Walt Disney Studios Park, adding three new areas are Avengers Campus Paris, Arendelle: World of Frozen and Star Wars: Galaxy's Edge, along with multiple new attractions and live entertainment experiences.[1]

Disneyland Paris announced plans for a new Marvel-themed attraction which would open at the Walt Disney Studios, part of the new Marvel area development. In June 2021, the resort opened Disney’s Hotel New York: The Art of Marvel, a reimagining of Disney’s Hotel New York that showcases the inspiring worlds of Iron Man, The Avengers, and Spider-Man, among others. In summer 2018, the Marvel Summer of Super Heroes seasonal event took place at Disneyland Paris, where guests could meet their favorite heroes and experience new live entertainment.

Due to the Covid-19 pandemic, work on the area was temporarily halted until early 2021, thus postponing the opening date from Summer 2021 to Spring 2022, until it was pushed back again to Summer 2022. 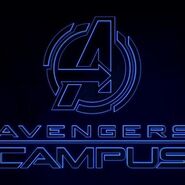 Concept art of the vehicles of "Iron Man Jukebox Coaster"'

Concept art of the vehicles of "Iron Man Jukebox Coaster"