Disney Wiki
Register
Don't have an account?
Sign In
Advertisement
in: Characters, Dog with a Blog characters, Disney characters,
and 14 more

Flyer of the cheerleader squad

Stan (dog)
Avery Jennings is one of the protagonists in Dog with a Blog. A brilliant, organized girl who's a stickler for the rules, she is the exact opposite of her stepbrother, Tyler, which often results in the two clashing. She is the daughter of Ellen, the stepdaughter of Bennett, and the stepsister of Tyler and Chloe.

14-year-old Avery Jennings is the highly intelligent, hardworking stepsister of Tyler James. She hates the fact that Tyler feels everything has to go his way and that good things always happen to him, such as in the pilot when Tyler "books" the living room as an excuse to have the school's cheerleading squad come over. Avery is very straight forward in following the rules and reluctantly goes along with what Tyler does. She is very smart, an overachiever, and knows what she wants, and what she wants to do is get into law school. She wants everything to be handled in an orderly, organized fashion, such as posting sign-up sheets for the living room and the bathroom. Avery is socially responsible and despises boys like Tyler, although the two do have brother - sister heart-to-heart discussions showing that, at the end of the day, no matter how much Tyler annoys her, they love each other. Avery is a very good problem-solver, the school president, and an amazing juggler.

Avery is at the average height for her age. However, she was shown to feel shorter in Season 2, when she remarks on how small she is and makes desperate attempts to make herself look taller. She has long blonde hair. Sometimes she has her hair straight, often held back by a hairband, or occasionally curly. She has dark brown eyes and usually wears girly outfits with bright colors and dresses more sophisticated.

In Season 1, her most common wardrobe style was wearing colorful blouses with T-shirts, often neckties, and skirts with leggings. In Season 2, this style was slowly phasing out and Avery began to wear more organized, new styles consisting of dresses and regular girly clothing.

Tyler and Avery have a complex relationship. Even after a year of their two families merging, the step-siblings always bicker. After Bennett brings Stan home from the shelter, Avery and Tyler bond a lot quicker, as Bennett had told Ellen would happen. Often Avery's organization and intelligence clashes with Tyler's disorganization and lazy attitude. Even though Avery and Tyler are different from each other they use their skills to come up with a plan along with Chloe and Stan. They have a classic sibling relationship; they may appear to dislike each other, but on the inside they truly love each other. Stan and Chloe often play peacekeeper during their fights.

Ellen is Avery's biological mother and one of three biological relative in the Jennings-James family. When Avery was younger, Ellen often took Avery to the park. One of their Christmas traditions was that Avery did not make a list, which always resulted in Avery receiving a gift that she did not like, leading her to believe that her mother didn't really understand her. Ellen actually does understand Avery and the other kids, and puts 110% of work into making sure that they know that she loves, trusts, and respects them.

Chloe is the half-sister of Avery. She is the youngest in the family. Avery and Chloe get along, but often Chloe does crazy things that Avery and the rest of the family cannot believe. Chloe loves animals and has a wide imagination. Avery and Chloe are good family members and love each other in a sisterly way. Avery, unlike Tyler, sees through Chloe's manipulative cute eyes.

Stan is the family dog and Avery's best friend; of all the kids, Avery shares the closest bond with Stan, and she often comes to him for advice although occasionally she's too stubborn to admit her problems or when she's wrong. Stan cares deeply for Avery and often has problems in their friendship that relate to his being a dog, such as when he was afraid of his dog-years limiting how much time he might have left with Avery until he realized he had to live in the present rather than worry about the future. 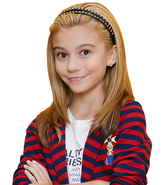