Wants her daughter to become Empress

Azma appears to be disappointed in Yzma and has referred to her as a "prune face wannabe". Either her high expectations of Yzma or Yzma's need to prove her mother wrong prompted Yzma to lie about her achievements. Surprisingly, Azma had nothing to say when Yzma was dethroned.

She made one appearance in the series in the episode "The Bride of Kuzco". She is confined to a wheelchair and speaks in wheezes, which only Yzma and Kronk understand. When she visited her daughter, Azma did not have a good trip due to not requesting an aisle seat. She was impatient to see the Palace and Yzma as Empress.

Previously, Yzma had told Azma that she had killed Kuzco and taken over the kingdom. After learning that her mother would be coming to visit, she (in disguise as Principal Amzy) asked Kuzco for a favor for her "friend": would Kuzco let her "friend" pretend to be Empress in order to prevent her from being embarrassed when the truth was discovered. Kuzco declined.

Yzma was angry but knew that at some point Kuzco would need a favor and she would be waiting. Later that day, Kuzco needed a way out of a pre-arranged marriage. Being Empress was her condition, which Kuzco was able to renegotiate to being only for a day instead of permanent. Her first act as temporary Empress was to have Kronk bring her mother to see her and then to gloat about her new status. Yzma's time as Empress ended when the potion used to change Kuzco's bride-to-be wore off.

Azma is mentioned in the episode "Yzma Be Gone", Yzma reveals that her mother nags her incessantly, forcing Yzma to carry out her plots to overthrow Kuzco and become empress. Azma is briefly mentioned the episode "Oops, All Doodles" during Yzma's doodle segment of the episode. 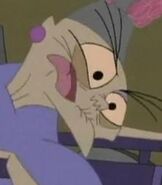