Anywhere or anything scary in general, his siblings teasing him for being scared, cats, the idea of being adopted (formerly)

Billy
B-Dawg is a golden retriever puppy who appears, along with his siblings, in the Air Buddies film series.

B-Dawg enjoys hip-hop, bling, and rap. He wears a silver chain necklace with the letter "B" on it and usually ends his sentences with "Dawg." His catchphrase is: "I am the ultimate P-U-P!" He always tries to show off and make everyone think he is not scared when he actually is. When talking to his siblings or his mom, he always uses slang, which often perplexes them. He is sometimes rebellious, as shown in the first Air Buddies film when he said, "No one tells B-Dawg he has to take a nap," after Mrs. Niggles told the Air Buddies to rest. He lives in Fernfield, Washington, with his famous all-star father, Buddy, and mother, Molly. His owner is Billy, a boy who is into music and dancing. 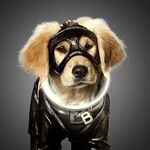 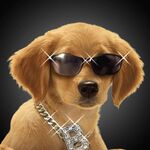 B-Dawg under the power of the collar of Cleocatra 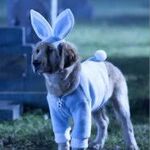