Rebel Pilots
The B-Wing Starfighter (also known as the A/SF-01 B-wing starfighter) is a starfighter that appeared in the Star Wars franchise.

Used by the Rebel Alliance, The B-Wing was the Rebels' most powerful heavily-assault starfighter. It was designed to take on much larger Imperial capital ships, thus providing the Alliance fighters with the punch of capital ships at a fraction of the cost. Although only about four meters longer than the famed X-Wing, the B-Wing had more firepower than many Imperial patrol ships.

The original B-Wing is essentially a long, flat wing with a cockpit on one end. Two folding airfoils near the midpoint of the primary wing extend out for combat. The fighter has an unusual cockpit gyro-stabilization system that allows the cockpit to remain stable while the rest of the ship rotates around it, significantly reducing stresses that result from sudden maneuvers. Unfortunately, this complex gyro-stabilizing system frequently breaks down. This locks the wing assembly in position, making it almost impossible to turn the ship without severely straining the spaceframe.

Because the B-Wing's advanced targeting computer links the performance of the ion cannons and proton-torpedo launchers, giving the ship maximum firepower against a single target, although the pilot can choose to fire between different targets. The pilot can choose to fire a low-power targeting laser to "tag" enemy ships. While this gives the pilot nearly perfect range and vector information, it also gives away the B-Wing's position.

In standard configuration, each secondary wing has one ion cannon, with a third ion cannon located at the base of the main wing. A laser cannon and an emission-type proton-torpedo launcher are also mounted on the end of the main wing. the engineers sit just above the extending wings, with another proton-torpedo launcher immediately above the engines. A pair of auto-blasters are in the nose of the cockpit module; technicians can opt to mount up to four auto-blasters in the nose section.

B-Wing designers deliberately made the weapon-mounting points modular. Technicians can reconfigure auto-blaster, laser-cannon and ion-cannon mounts within a few hours. A popular alternative B-Wing weapon configuration is achieved by removing the auto-blasters and mounting the three ion cannons in the command pod, with a laser cannon placed on the end of the main wing and each airfoil.

Each fighter is powered by a single immense Quadex Kyromaster engine with four individually adjusted thrust nozzles. The engine is fed by a single Vinop 02 K ionization reactor and four Slayn and Korpil JZ-5g7 power converters. the ship has four cooling plates to dissipate exhaust heat.

The B-Wing has moderate sublight speed capability, and its hyperdrive, a Class Two unit, is only half as fast as comparable X-Wing and A-Wing hyperdrives. Unlike other Rebel starfighters, the B-Wing does have a navigation compute, but it stores only two sets of jump coordinates.

The B-Wing in Star Wars Rebels 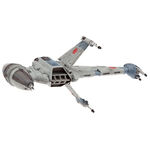