Internet
B.E.V. is a character that once served as the main antagonist of Ralph Breaks the Internet and reinvented for Ralph Breaks VR. She is the head of Interneat, an antivirus software. Despite serving a noble facility, B.E.V. is a cold-hearted figure with a fascist streak.[2]

Early versions of Ralph Breaks the Internet included a villainous character for Ralph and Vanellope to overcome; not unlike King Candy in Wreck-It Ralph. B.E.V. was the overlord of Interneat, a powerful organization built to eradicate all viruses in the Internet. The character was modeled after co-director Phil Johnston's mother and went through a number of iterations over the course of development.

The most notable iteration of B.E.V. was a manipulative villain that posed as a sweet, Midwestern lady. In another version, she was an antagonistic, yet well-meaning security official that sought to protect the Internet by any means necessary. In some versions, even B.E.V. was a militaristic male character with a cold and formal demeanor. Eventually, the filmmaking team opted to cut B.E.V. and the idea of a villain altogether in favor of a narrative in which Ralph's internal struggles served as the antagonist.[2][3][4]

Development of Ralph Breaks the Internet coincided with the development of a virtual reality experience based on the film. The team behind it, Void, needed a villain for the attraction. They approached Pamela Ribon and requested a villainous security system, to which Ribon responded by introducing them to B.E.V. Ribon passed over the news of B.E.V.'s involvement in the attraction to Phil Johnston and co-director Rich Moore, who were delighted to know the character had been resurrected.[5][1]

B.E.V. serves as the main antagonist of the virtual-reality attraction Ralph Breaks VR. In the attraction, Ralph and Vanellope sneak guests into the Internet to enjoy some online games. Unsurprisingly, Ralph's wrecking causes problems. Ralph and the guests are detected as viruses, prompting B.E.V. to unleash her antivirus drones upon the heroes. 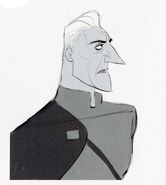