BB-9E is an astromech droid that appears as a minor antagonist in Star Wars: The Last Jedi. It is a BB-series droid like BB-8, designed to move like a rotating ball, whose allegiance is with the First Order.

BB-9E is one of the BB astromech units that belongs to the First Order and was assigned to Snoke's flagship, the Mega-class Star Dreadnought Supremacy. There, it is responsible for keeping the machinery operational, making sure that the procedures are being followed and also checking for the presence of infiltrators or any potential threat inside the ship.

Although the BB-series astromech droid is usually a friendly model, BB-9E is cold and malevolent. This personality is result of being treated simply as a machine by the First Order, very different from the treatment that BB-8 and other droids receive in the Resistance. In order to keep BB-9E submissive, the First Order would often erase its memory, but this ultimately did not prevent the droid from becoming malicious and it is especially mean while working to report threats inside the Supremacy.

As they are from the same series of astromech droid, BB-9E and BB-8 look very similar, except for their colors. Instead of being white and orange, BB-9E is dark colored. It is a black and rounded droid with a square-domed head, silver markings and vents. It has a red optic sensor that it is kept out to detect intruders.

In the film, BB-9E is responsible for revealing BB-8, Finn and Rose Tico while they are disguised as First Order officers to go undercover on the Mega-class Star Dreadnought Supremacy, resulting in them being captured by Captain Phasma and her followers.

BB-9E makes an appearance in the episode "Hey You", where BB-8 bumps into BB-9E trying to provoke it. 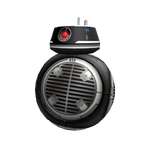 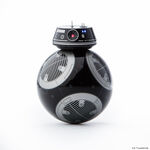 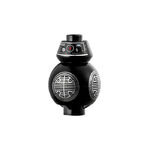 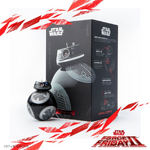