To repair a lamp on the outside of the Axiom

Repairing over and over again

Gets left behind on the Axiom
BURN-E (which stands for "Basic Utility Repair Nano Engineer") is a welder robot who is seen briefly in the 2008 Pixar film, WALL-E, when WALL-E and EVE fly around the Axiom starliner and re-enter the ship through a door, locking him outside. BURN-E is then seen banging his fists against the door, ultimately realizing that he has been locked out.

BURN-E is also the titular character of a parallel spin-off short from the film. This short was produced at the same time as the movie, and was directed by the feature film's lead animator, Angus MacLane (who also supplied BURN-E's voice). The short is included as a bonus feature on the DVD and Blu-ray releases of WALL-E and has since been aired on TV as well. BURN-E features music composed and conducted by J.A.C. Redford, who was also the orchestrator on WALL-E.

BURN-E on the poster of the short

"Did you really lose the light?!"

Keeping himself busy until his doors open

Burn-E is stunned by the Axiom's merciless velocity 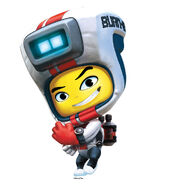 Retrieved from "https://disney.fandom.com/wiki/BURN-E_(character)?oldid=3755883"
Community content is available under CC-BY-SA unless otherwise noted.