Relaxing, having Monti to cook for him

Boredom, being confused, talking about the "sparkly dots" up in the sky

Pumbaa (polar opposite)
Baampu is a warthog from the Timon & Pumbaa TV series who makes his first and only appearance in the episode "Kenya Be My Friend?".

Baampu is identical to Pumbaa in both size and shape. He is broad and portly with a large head, a round middle, and skinny legs. Like most warthogs, his tusks are white and his hooves are black, with his nose being a pale pink. His main shade is dark blue, contrasting Pumbaa's red, and his stomach is navy, almost black. His mane and tail tip are both chestnut in color, while his eyes are small and dark.

Baampu is the polar opposite of Pumbaa. Dim-witted, gruff, and quiet by nature, he is much less perky than his good-natured companion. He is not too deep the thinker and would rather accept the beliefs of others than give his own explanations for the phenomenons of the world. In addition to being a silent presence, Baampu is rarely bothered by personal intrusions, giving hardly a reaction to a stranger's prying. He makes friends quite easily, as he was willing to accept Timon as his new best friend almost immediately.

Around Monti, Baampu comes alive, turning into a loud mouthed jokester with an opinion of his own. His reunion with Monti also reveals him to be oblivious to the feelings of others, as he walks off with Monti without giving Timon a second thought. He does, however, seem to genuinely care about his best friend, as he remembers many memories from their time together in the past.

Baampu is a warthog who lived near the jungle. It is unknown if he lived within the boundaries of the jungle or in a surrounding area. He and his best friend Monti accidentally lost touch.

When Timon is in need of a new best friend, he seeks out another warthog to replace Pumbaa. Among a group of other animals, Baampu is spotted, and Timon proceeds to question the warthog about his name, reaction to predators, and affiliation with "Bestest Best Friend Day." Pleased with what he hears, Timon declares Baampu his new best friend.

Later that night, the two are stargazing, and Baampu questions Timon about the "sparkling dots" in the sky. Timon declares them to be fireflies, and Baampu, satisfied by his new friend's answer, falls into silence. Although the warthog is content, Timon is upset that Baampu does not show as much interest in the stars as Pumbaa.

The following morning, Baampu and Timon run into Monti and Pumbaa at the watering hole. Surprised to see each other, Baampu and Monti greet each other. In their haste to reestablish their friendship, they forget about Timon and Pumbaa and walk off into the grasslands together. 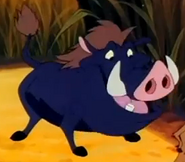 Baampu reflecting his friendlier nature when around Monti

Monti proposes an idea to Baampu