Garden of the Twelve Friends

Paul
Babe is a character from the animated short, Paul Bunyan. He is a big blue ox found in the snow by Paul Bunyan. Afterwards he becomes Paul's closest friend.

During the Winter of the Blue Snow, Paul rescues Babe after hearing him moo for help. Striking an immediate friendship, they journey west through the snowfields. The tracks they left behind would end up becoming the 10,000 Lakes that gave Minnesota its nickname. Other feats the two accomplished included logging throughout the Dakotas, carving the Missouri River to send logs downstream, creating Pike's Peak to serve as a lookout, created the Grand Tetons through their playful wrestling, and created Yellowstone Falls to clean up. Eventually, when losing a logging contest to a new electric sawing machine lead to their superhuman feats falling out of fashion, the two would travel far north to the wilds of Alaska, with the Northern Lights being the result of their play disrupting the aurora borealis.

A regular-sized Babe makes a cameo appearance in the final scene of Who Framed Roger Rabbit.

Babe appears in Epic Mickey 2: The Power of Two as part of the scenery of Fort Wasteland.

In the TV series Aladdin, Genie is shown to transform into a version of Babe a few times.

In the Phineas and Ferb episode Greece Lightning during the race, the racers pass through the restaurant Paul Bunyan's Pancake Haus, as Norm bumps into the statue of Babe the Blue Ox with the statue's head ending up on Norm (whom Phineas thinks he is a Minotaur).

In Bolt, an image of Paul Bunyan and Babe appeared on the Waffle World U.S.A. Map.

In Once Upon a Time, Babe doesn't appear. However, he was seen with Paul Bunyan into an illustration in a second volume to the fairy tale book by Henri Miller et Violet.

Babe is one of the characters included as part of Garden of the Twelve Friends at Shanghai Disneyland, representing the Chinese Zodiac symbol of the Ox. 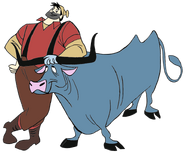 In Phineas and Ferb