Being babysat by Donald, games, jokes and humor

Donald trying to make him mind, being on stage (formerly), not getting his way

Shelby the Turtle, commonly referred to as Baby Shelby, is a green turtle who first appeared in Mickey Mouse Works.

Shelby makes his debut in the cartoon "Donald's Shell Shots" where Shelby is meant to take a photo at the mall. However, Donald is the photographer and matches wits with Shelby. Shelby would later go on to star as an adversary for the duck much like Chip and Dale or his nephews. Shelby also went on with Mickey Mouse and Goofy in the cartoon "Babysitters".

Shelby is often seen causing trouble for Donald Duck, or rare to Mickey Mouse. He doesn't speak, but he is famous for his trademark laugh. He also can speak in thought as seen in "Donald's Pool". Shelby's mother, Mrs. Turtle, is overprotective of her son and will often yell if she can't find him, or if she gives someone an order. 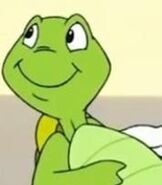