Weems is a cute little baby who is somehow highly intelligent since birth. He is still a baby nonetheless: having baths, diaper changes, etc. He became famous for being a newborn that is intelligent. But close to the end of his story, Weems somehow became a normal baby with unintelligible speech and such.

Baby Weems was born to Mr. and Mrs. Weems. The nurse commented about how quiet he is only to be shock and fainted at hearing the baby's response in normal speaking. The doctors were surprised at this too and it begins the fame of Baby Weems. Unfortunately, his parents never get the chance to see him and only had the radio that tells about their baby. When Baby Weems was about to give a speech at the White House, he falls to some sort of illness. When he miraculously recovers, the people were ready to hear him speak again. But to their shock, he speaks like a normal baby. Because of this, his fame became only a memory. But happily, his parents finally had their son back and they were happy to have a normal baby.

Baby Weems with Albert Einstein in The Reluctant Dragon 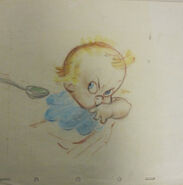