Once Upon a Time in Wonderland (as Will Scarlet)

The Baker seems to have a kind yet rather shy demeanor. He seems to be a bit unsure of himself, but is willing to stand up against people like Lady Tremaine for Anastasia's sake. The Baker also seems to be dedicated to his work, as his bakery is well-kept and he is shown working earnestly. Most of his efforts are spent baking, but he does appear to be a loyal subject of the King and the Prince, receiving the latter with appropriate honors when he and Anastasia were invited to a party by Cinderella and her husband.

The baker is chubby with a fair complexion. On the job, he wears a white apron over a green polo shirt with cuffed sleeves. He wears regular grey pants that go down to his calves and regular grey shoes. At the ball, he wears a tuxedo with an ascot, which suggests he may be a rather successful business owner as he can afford such fine evening wear.

The baker first appears in Cinderella II: Dreams Come True, He was on the other side of the gate of the castle to say hi to his friend Cinderella along with her other friends. He also appeared in later on where Lady Tremaine takes Drizella and Anastasia to town in the hope that one of them will be married to royalty like Cinderella for Lady Tremaine stated to her daughters not to fail her again. When walking through town Anastasia smells the bread that the baker is cooking and comes inside to look around which causes her to make eye contact with the baker. The baker offers Anastasia some of the bread that he has just baked, but it is short-lived for Lady Tremaine came in stating that she was forbidden see the baker for she is above him in standards.

Cinderella sees the two in the bakery together before Lady Tremaine had taken her daughters out for new dresses and Cinderella thinks up of a way to have the two to see each other again in the town square. The plan works for Anastasia and the baker did see each other at the square, but Lucifer chases the mice around the square causing a horse to kick Anastasia which humiliates her in front of the baker and the townspeople.

Anastasia goes into town buys a heart shaped garland of flowers for the baker as the baker had did the same for Anastasia. Anastasia sees the baker with another woman not knowing he was asking advice about the flowers and runs off to the fountain where he finds her. The baker gives her a flower that he saved for a goat had eaten the rest of it and Anastasia puts the flower in her hair accepting it as a token of his love and affection for her.

Lady Tremaine sees the two together once again and tells Anastasia that she has her best interest in mind for she wants what is best for Anastasia, which really she wants to use her daughter for material gain. Anastasia defies her mother and tells her that she will be going to the ball with the baker. At the end, they were together dancing happily alongside Cinderella and the prince.

The Baker makes a small cameo at the end credits of the third Cinderella film in a painting with Anastasia, hinting that the events in Cinderella II: Dreams Come True may take place after the occurrences in Cinderella III: A Twist in Time on the timeline of Cinderella.

The Baker and Will Scarlet, the future Knave of Hearts are the same character on the show, by his love relationship with Anastasia and was considered like a loser by Lady Tremaine. 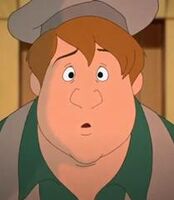 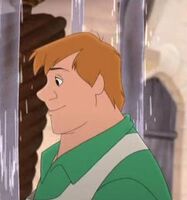 Baker-and-anastasia.jpg
Add a photo to this gallery