Failing missions, Dakota's ignorance
Balthazar Cavendish (regularly addressed as Cavendish) is a major character in the Disney Channel original series, Milo Murphy's Law. He was a Time Traveler given the mission of protecting Pistachio nuts along with his partner (and best friend) Vinnie Dakota. Him and Dakota were later banished to the present and lived as Alien Refuse Engineers. Cavendish later abandoned his job and erased Dakota's memories in order to search for aliens.

Aside from the opening credits, he first appears in "The Doctor Zone Files" arguing with Vinnie Dakota about the pronunciation of "pistachios" and how he doesn't speak to the customers. He happens to be a little dumber than Dakota, as he told Dakota never to speak with the customers, despite Dakota stating that he was speaking to Cavendish instead of the customers. Cavendish even accuses Dakota of sabotaging their pistachio stand when it blew sky high, though Dakota pointed out that Cavendish spilled some ingredients that jammed the broiler in the first place, much to Cavendish's annoyance. Just after the pistachio stand exploded, they disappeared.

He made cameo appearances with Dakota in "The Note", "Party of Peril" and "The Wilder West", usually manning a pistachio cart; the two also appeared in "Smooth Opera-tor" running the concession stand at the opera house.

In "Worked Day", the pair have an expanded role, in which they are assigned a mission to see a truck of pistachios safely to a warehouse. Balthazar is determined to complete the task-going so far as to take over driving the truck-while putting up with Dakota's different suggestions as to what they should do for lunch afterwards. After driving the truck to the wrong location in Danville, the pair attempt to drive it to the correct location only to get dragged off course by an overloading MRI machine, which causes the truck to crash into a hospital. The pair later make another appearance in "Family Vacation" where, after Mr. Brulee's RV - carrying Milo-crashes into a building they're in, Balthazar blames Dakota.

In "Murphy's Lard", the pair attempt to secure a pistachio stand at Lard World, with Balthazar erecting a defensive structure while Dakota sits around eating or playing any of his various instruments. They succeed in protecting the pistachios from several threats, only for the stand to be destroyed after they prematurely take the stand down.

Balthazar and Dakota make another cameo in "Secrets and Pies" where they have been assigned to keep pistachios from leaking out of a silo; unfortunately the pair end up causing the silo to collapse and are caught in a tidal wave of nuts. In "The Substitute", the pair are transporting a futuristic fertilizer to a pistachio sapling at Milo's school only for their Quantum Localizer to land them in a science class closet before running out of power. The fertilizer ends up mixing with another chemical to become a sentient blob, which grabs the pair and throws them out into the hallway. Balthazar is then able to chase Diogee away from the sapling only to end up stepping on it; the blob later brings it back to life with unknown consequences.

In "Time Out", Balthazar and Dakota end up bothering Brick and Savannah, fellow time travel agents, where it's mentioned he and Vinnie are both "From the '70s"; 1870s and 1970s respectively.

By "We're Going to the Zoo", due to Milo Murphy's recurring presence at the sites of failed missions, Balthazar has come to suspect that Milo is an operative from another time travel agency attempting to sabotage him and Dakota. He and Dakota then go to the zoo on orders from their superior Mr. Block, only for the pistachios they are guarding to be eaten by giraffes after Milo once again appears.

In School Dance". Balthazar and Dakota head to their office and narrowly avoid a confrontation with their landlord, who demands that they pay their rent. They then contact Mr. Block, who gives them a new mission while also informing them that there is no rival time travel agency to which Milo belongs. Balthazar is unconvinced and so takes Dakota-carrying a bag of wooden stakes they're supposed to used to support plants at a pistachio farm-to Milo's middle school dance hoping to discover the truth. The two are mistaken for vampire hunters in pursuit of Kyle Drako, and Balthazar accidentally sends the band for the dance into the future when he drops his temporal transporter while pursuing Milo. The pair are left with no conclusive evidence that Milo is working against them, though a misunderstanding with the students who think they are vampire hunters has Balthazar more convinced than ever that Milo is opposing their efforts.

Balthazar appears again in "The Little Engine That Couldn't", where he and Dakota are assigned to transport two boxes of pistachios using their new vehicle: a tandem bike. Balthazar looks on this as yet another case of being demeaned by his superiors, but is distracted when the bike and pistachios are crushed by a runaway antique fire engine carrying Milo Murphy. Determined to find out who Milo is working for—since he is unaware that Milo isn't working for anyone—he drags Dakota in pursuit of Milo. They briefly interact with Milo and witness him saving a number of cats sent flying by the engine, and Dakota catches one that resembles Balthazar. The cat also demonstrates the tendency to mock him, both before and after the pair are thrown from the engine into a nearby pond.

It is revealed in the special, "Missing Milo", Cavendish and Dakota are the inspiration for the fictional characters Doctor Zone and Time Ape. 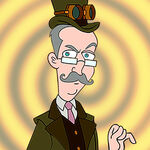