The Great Princess of the Forest

Being with her son, grass

The Great Prince of the Forest (mate)

Bambi's mother is a major character in Disney's 1942 animated feature film, Bambi. She was a doe who lived in the forest as the mate of the Great Prince of the Forest, and mother to their son, Bambi. She dedicates the latter half of her life to raising Bambi in preparation for life in the forest. Shortly into her son's childhood, however, she is killed by an unseen hunter known as Man.

The death of Bambi's mother is widely regarded as one of the most shocking, yet significant moments in cinematic history, as it introduced children to the concept of parental death in a way that had never been seen prior.

Little is known about the early life of Bambi's mother except that she and her future husband, the Great Prince, met in childhood and that she grew up with another doe named Mena. It is also known that she was a relative to Ena, who is probably either her cousin or sister (as mentioned in the original novel)

Bambi's mother is introduced after having just given birth to her only son. She is often teaching Bambi about the forest and warning him of the dangers of Man. She and her son endure a harsh winter in which there is little food in the forest. While out in the meadow, she and Bambi find a small patch of grass to graze, but as they eat, she senses danger and tells Bambi to run back to the den as fast as he can. She sprints after him, continuing to urge him onward. Gunshots are heard in the background, but she tells him to keep running, and not to look back. After another gunshot rings throughout the forest, Bambi makes it safely back to the den, but finding his mother isn't with him, leaves and begins calling for her in vain. The Great Prince finds Bambi, and tells him that she could no longer be with him, and to come with him. This reveals the death of Bambi's mother, and that the Great Prince was his father.

Bambi's mother makes a short appearance to Bambi in his dream, telling him that everything would be alright and that she would always be with him in his heart. After waking up, Bambi still hears her voice. He goes to the meadow and discovers she is not there. Her voice still trails out on the meadow, sending Bambi to find her and into what becomes a life and death situation. After being saved from Man's dogs by his father, Bambi learns that it wasn't his mother that he heard, but a tool used by Man to make a deer noise.

On their way home, Bambi asks his father if his mother is ever coming back, and the Great Prince sadly answers no, meaning that Bambi's mother is dead.

Later in the film, when Mena was trapped by one of Man’s snares and tells Bambi to run, she inadvertently repeats the last words that Bambi’s mother shouted before she died, which prompts Bambi to lure the dogs away from Mena, so she wouldn’t suffer the same fate that his late mother did.

In The Sword in the Stone, Kay is hunting a deer who looks very much like her.

In The Jungle Book, a deer that strongly resembles her is grazing in a meadow, and being unknowingly stalked by Shere Khan.

She and Bambi make a cameo in the Donald Duck cartoon, No Hunting. When she notices litter going down the stream, she tells Bambi, "Man is in the forest. Let's dig out."

In The Rescuers, during the song "Someone's Waiting For You", she and Bambi are seen grazing in Devil's Bayou.

She, along with many other Disney Characters, made cameo appearances in the film Who Framed Roger Rabbit.

In Beauty and the Beast, there is a deer grazing in the opening scene that greatly resembles her.

Bambi's mother's dead body in an image for a deleted scene

Bambi and his mother in a concept sketch/design

Bambi's mother and Bambi in the meadow

Bambi's mother looking at her mate

There is something wrong: Man is coming...

Bambi and his mother in a cameo in No Hunting

Bambi's mother in The Sword in the Stone, about to get shot by Kay

Bambi's mother in The Jungle Book

Bambi's mother in Beauty and the Beast.

Bambi's mother appearing to him in his dream in Bambi II 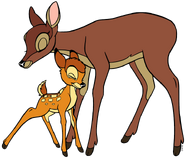