Disney Wiki
Register
Don't have an account?
Sign In
Advertisement
in: Article of the week, Characters, Disney characters,
and 36 more
English

Monarch of the Forest

Copying how the grown-up stags prance around, his friendship with Thumper and Flower, flowers, butterflies, snow, Faline

Ice-skating, his mother's death, forest fires, hunters, his father's stubbornness, Ronno being rude to him and Faline, his friends and Faline in danger

Unnamed mother †
The Great Prince of the Forest (father)

Geno (son)
Gurri (daughter)
Bambi is the titular protagonist of Disney's 1942 animated feature film of the same name. A deer living in a forest, he is best friends with Thumper (a rabbit) and Flower (a skunk). However, he was closest to his mother, who was shot and killed by a hunter during his first winter. Raised into a buck by his father, he strongly falls in love with his childhood sweetheart and love interest, Faline, and they end up, later on, having twin fawns, a son and daughter named Geno and Gurri, respectively.

Bambi originated as the main character in Felix Salten's Bambi, a Life in the Woods. He has made cameos in several Disney cartoons. In the Disney films, his species was changed from the roe deer to the white-tailed deer, which would be more familiar to American audiences. His image is a Disney icon comparable in recognition factors to Mickey Mouse, and he is even shown on Disney stock certificates.

Bambi ― as with most of his friends ― is similar to any deer in any forest. In his early youth, Bambi has the full measure of charm that many young mammals display, with his wide eyes, spindly legs, curious nature, and a good cute voice. As he grows he gradually becomes more mature, but even in young adulthood he always seems a very young buck, with a graceful build and a fairly naïve, shy nature. He was nicer than his mean rival, Ronno, who was jealous of Bambi. When he had two fawns, Geno and Gurri, he was a carefree father, happy and sweet to his children.

When he is a teenager, Bambi remains the same except he no longer has spots or the grey stripes, his fur is a little darker, and has budding antlers.

As an adult, Bambi has darker brown fur, a slightly muscular frame, and black antlers with two points. The wheat stripe on his neck and underbelly now stops under his head and continues above his chest.

In the first film, the chronology of Bambi's life from birth to young adulthood is showcased. At his birth, all the inhabitants of the forest gather to greet the new prince with open arms. Among them are Friend Owl (who acts as an adviser to Bambi's father, the Great Prince of the Forest) and Thumper.

As the months go by, Bambi creates bonds with Thumper and a bashful skunk by the name of Flower, forming a strong trio. He also builds a weak friendship with Faline, a fawn who he fell in love with, despite being disgusted by her at first glance because of her overly bubbly personality. Aside from friendships and romance, Bambi's primary concern is his mother, who he loves deeply, often learning life lessons that stick with the young prince. One of those lessons involves being conscious of "Man"; the forest's most feared enemy. Man is known for being a ruthless hunter, killing animals for the sake of the sport, having no regard for anything else, not even the animals' lives or if they have family. One day, while out during his first winter, Bambi's mother is killed by Man; though the young fawn manages to escape before he falls victim, as well. Without his mother to care for him, the Great Prince of the Forest arrives and decides to raise Bambi himself, tragically confessing the loss of his mother and taking him from his old home.

Years later, Bambi grows into a strong young adult buck, dashing, but still as shy and somewhat clumsy as ever. He retains his friendship with Thumper and Flower and, as predicted, falls in love with Faline; or as Friend Owl likes to put it; becomes "Twitterpated". Now experiencing true love for the first time, Bambi began his life with Faline as his mate, exploring the forest together, proclaiming their love, and battling the vicious Ronno for her affections, eventually coming out victorious. This also signifies dominance and maturity on Bambi's part, which comes in use, as he's slated to take the role as Great Prince of the Forest, following his father's footsteps.

With life seeming as peaceful as ever, Man returns to the forest with more men and with a pack of bloodthirsty dogs. Several forest dwellers are killed by the invasion and Faline is attacked, but was rescued by Bambi before it was too late. Even so, back at Man's camp, a fire accidentally breaks loose, setting the forest ablaze. Bambi and his father rush through the woodlands to escape the devastation as the other creatures do the same, finding a small island offshore of the forest where they're sheltered until things settle down. And although they barely survive, Bambi and the Great Prince manage to escape the catastrophe, as well.

Sometime after the forest's restoration, Bambi and his father watch in the light of the sun as Faline gives birth to two young fawns, causing a celebration echoing Bambi's birth and ushering in a new chapter. The Great Prince then proudly steps away, allowing Bambi to rein in as the new Prince of the Forest.

In Bambi II, Bambi is much more distinctly personalized. In this film, which fills in the gap between the death of his mother and when he was next shown as a young adult, Bambi finds himself faced with a number of challenges. First, there is the death of his mother and his consequential move to live with his father, the Great Prince of the Forest. Connecting with that, there is the fact that his father has no knowledge of raising children and is reluctant and slow to learn. In addition, Bambi begins to develop romantic feelings for Faline and comes into conflict with his present and future rival, Ronno.

Throughout all of this, he shows much more personality than he did in the first film. Whereas before he essentially followed life where it led him, now he grabs life by the horns in one attempt after another to bond with and impress his father. In the first film, Bambi's status as the young prince had little impact on the flow of the story. But now his rank becomes a key part of the situation as he sets out to prove to himself and others, most of all his dad, that he deserves to be the prince and can live up to his father's name.

Close to the end of the film, Bambi has lost his spots and starts to grow antlers. He then gets prickled by the porcupine and kisses Faline. He then leaves with the Great Prince who takes him to the meadow where he and Bambi's mother first met as children.

In the episode "Dining Goofy", he is shown to be unamused with the fact that he was seated with Big Bad Wolf.

In "Jiminy Cricket", Bambi, Thumper, Flower, Miss Bunny, and a Chipmunk were used as examples of the places to live in by Jiminy's quote, "Live in the forest once, but leave before it makes you soft."

In "Ask Von Drake", Bambi was featured alongside Thumper and Flower during the headcount of all the Disney character guests.

His only speaking role in the series was the episode "Mickey vs. Shelby" where he comments to Thumper on how Baby Shelby looked like a "deer in the headlights" on stage before Benny the Cab flashes his car-lights in front of him.

In "Pete's House of Villains", Bambi and Thumper get visibly angered at Pete when he complains that everything about the club stinks, especially Flower, causing the latter's feelings to get hurt.

In the film Mickey's Magical Christmas, Bambi was seen amongst the crowd of characters preparing to leave the House of Mouse before realizing they're being snowed in during the storm and later singing during the ending song. In Mickey's House of Villains, Bambi was seen walking, next to Piglet, with the Disney Villains in the opening only.

In The Reluctant Dragon, Doris presents a completed cel of the titular character at the ink-and-paint department during a Technicolor-showcasing montage of the paint-making process.

Bambi and his mother make a brief cameo in the Donald Duck short No Hunting.

In the live-action True-Life Fantasy film Perri, an adaptation of another Felix Salten's books, a live deer is identified by the narrator as being Bambi.

In The Rescuers during the song "Someone's Waiting For You", Bambi is seen eating the grass in Devil's Bayou with his mother.

In Who Framed Roger Rabbit Bambi has a cameo appearance during the final scene with the other Disney and non-Disney characters. He even sings the ending song Smile Darn Ya Smile.

In Zootopia, a fawn statue resembling Bambi can be seen in the pit exhibit at the climax of the film.

Bambi makes an appearance in the Mickey Mouse episode "Duck the Halls: A Mickey Mouse Christmas Special", where he and Thumper are seen on an ice-skating rink.

In Ralph Breaks the Internet, a Bambi poster featuring Thumper, Flower, and Bambi can be seen in a young Disney fan's bedroom.

Bambi and his father appear in a portrait in the Amphibia episode "Fight at the Museum". 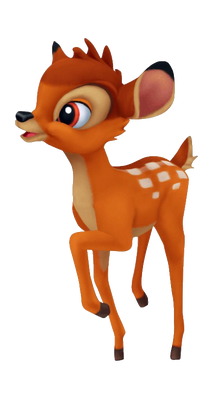 In this series, Bambi's unnamed (as of yet) world was destroyed by the Heartless. However, the strong sense of courage, innocence, and purity in the young fawn's heart allowed him to be preserved in the form of the Naturespark Gem. It somehow ended up in a torn page in the 100 Acre Wood.

After Sora finds this item in the Hundred Acre Wood and takes it to the Fairy Godmother, she restores Bambi's spirit and Sora gains the ability to summon him in battle.

After Sora seals Kingdom Hearts, Bambi's homeworld is restored, with Bambi himself returning to it. It is implied that he retains his memories of his time with Sora, as Mushu and Simba also recognize Sora from their time in his adventure.

Bambi's role in battle is to prance about the area, dropping huge amounts of MP orbs by hopping around the area. Any enemy defeated while Bambi has summoned drops more orbs than usual. Also, the more enemies Sora defeats while Bambi is summoned, the more orbs Bambi drops. If a certain amount of enemies are defeated while Bambi is in play, Bambi will make a great leap and drop a special item, usually, mega-potions and elixirs, but also synthesis items that Sora can use back in Traverse Town had he been having difficulty attaining them from their respective Heartless.

Despite being warned of humans before his world was destroyed, Bambi already becomes Sora's friend as expressed in his cheerful expression and reaction to the Keyblade wielder's summoning. Bambi dances around Sora then approaches him and allows the boy to pet him on his head before continuing to assist Sora in a battle.

In Disney California Adventure's World of Color, Bambi was briefly seen during the "So Close" segment with Flower and Faline. He also appears in a segment of the winter rendition Winter Dreams, with his friend Thumper.

During the Epcot Flower and Garden Festival, Bambi has his own exhibit and topiary.

In the park's version of It's a Small World, Bambi was seen alongside Thumper as a puppet.

The Disney Wiki has an article focusing on the relationships of Bambi.

The Disney Wiki has a collection of images and media related to Bambi.