Brute strength, speed
The Bandersnatch is a character in Tim Burton's 2010 film Alice in Wonderland. It appears as a bulldog/bear-like creature under the control of the Red Queen.

The Bandersnatch is large, with a barrel chest and fore-paws that are quite dexterous. It's covered in pale, shaggy fur with dark gray spots and has a somewhat flat (but not pug) face, with a wide mouth that has multiple rows of teeth and a long tongue. It also has a long tail. It doesn't speak, but seems at least somewhat intelligent. Evidently, it has venomous (or otherwise poisonous) claws, wounds from which will 'putrefy' unless treated by someone with evaporating skills-barring that, they may also be treated with the saliva of the Bandersnatch itself.

It appears crashing through a wall in the Mushroom Garden. Red Knights appear from behind it as they attempt to capture Alice's friends while the Bandersnatch chases Alice. Alice stands still, believing it is a dream and that the Bandersnatch can't hurt her, but when the Dormouse appears to save her by stabbing out its eye, it slashes Alice's arm while roaring in pain.

It appears again sleeping in its pen. It was going to hurt Alice as it woke up, but it decides not to after she gives its eye back. When Alice tries to open the chest containing the Vorpal Sword, the Bandersnatch turns around to strike again but, when Alice shows her swollen wounds, the Bandersnatch felt guilt as she passed out. The next morning when Alice woke up, it cleans her wounds and allows her access to the Vorpal Sword before going back to resting. When Alice is surrounded by Red Knights near the Bandersnatch's house by command of Ilosivic Stayne, it crashes out of the house and escapes to Marmoreal with her on its back, thus becoming Alice's ally.

On the Frabjous Day, it appears again with Alice coated in armor on its back. It goes with the White Queen's army to the chessboard battlefield as they come face to face with the Red Queen's army. When the Red Queen orders an attack after the Mad Hatter interferes the duel between Alice and the Jabberwocky, the Bandersnatch along with the White Queen's army fights in a battle against the Red Knights. During the battle, it knocks down a line of Red Knights stacked like dominos, which sets off a catapult that kills the Jub Jub Bird.

The Bandersnatch returns with the rest of Alice's friends back in Underland during a conversation with the White Queen where it is explained that Tarrant Hightopp, the Mad Hatter, is in risk of dying. When Alice returns and reports the sad news about the Hatter, the Bandersnatch and the rest of Alice's friends react in worry and fear that they would lose their best friend if he dies. Alice is then tasked to travel back in time to find the Hatter's missing family and save his life before he dies to which Alice and her friends travel to Time's Castle to help save the Hatter who is in the risk of dying by using a Chronosphere to travel to the past Horunvendush Day event and save the Hatter's family from death before it is too late, just as Alice's friends wish her good luck in helping save the Hatter.

After Tarrant is revived thanks to Alice saving his life, he and Alice ride on the Bandersnatch towards the Red Queen's castle just as the White Queen, the White Rabbit, the Tweedle Boys, the March Hare, Bayard, and the Dormouse follow along as they approach the castle.

The Bandersnatch appears as a boar-like a monster recruited by the Red Queen and Jafar to attack Alice in an attempt to urge her to use one of her wishes. The latter was captured with The Knave of Hearts by the ogre Grendel in an attempt to steal from him the Forget-Me-Knot, a valuable enchanted piece of rope. Alice succeeds in eliminating the creature by attracting it by the visual images thrown in the knot of the rope and by tightening the rope to hang it.

An older concept of the Bandersnatch

An older concept of the Bandersnatch (without fur)

Another older concept of the Bandersnatch. 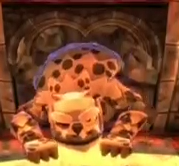 The Bandersnacth in Disney Universe

in Once Upon a Time in Wonderland (Liked Boar)