This article is about the character from Pirates of the Caribbean. For the character of the same name from Walt Disney's Enchanted Tiki Room, see Juan the Barker Bird.

The Barker Bird is a character from the Pirates of the Caribbean attraction.

The Barker Bird was an intelligent green parrot capable of speech. It appeared to have an affiliation with piracy, spending time in the ruins of the Castillo del Morro fortress of the Caribbean Plaza on Isla Tesoro, following the fort's raid at the hands of The Wicked Wench. It could often be heard quoting crew-mates of the Wench and singing a parody of, "Yo Ho, Yo Ho, A Parrot's Life for Me" called, "Yo Ho, A Parrot's Life For Me".

This bird was a green macaw which at some point in its right-leg and quite possibly its left eyeball. It would also have part of its chest removed of its feathers and have a nautical tattoo of an anchor put on it. The bird wore an eyepatch and peg-leg for its disabilities and also could be seen sporting a red bandana and a high cocked hat with a Jolly Roger embroidered upon it.

In 2006, the Barker Bird was removed from Pirates of the Caribbean during the refurbishment which incorporated in elements from the popular films of the same name. Following this it would be moved to Disney Springs in Downtown Disney however it would be left in worse repair with its materials fading from poor maintenance.

The Barker Bird used to appear outside of the Pirates of the Caribbean attraction on a perch visible to passers by in Adventureland. It would move around, sing and quote the ride, garnering attention for the attraction in the bustling park. It would also invite guests to enter the attraction, telling them, "Heave to, maties!  There be longboats waiting down by Pirate's Cove!  Waitin' to take you to the Spanish Main! Right this way!  Through the arches and down past the dungeon, in the old fortress".

Perched on a treasure-chest alongside a lantern and part of a ship's mast. It appeared in a Pirates of the Caribbean themed area of the shop. 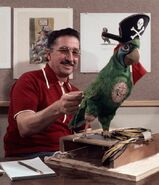 X. Atencio and the parrot

A plush of the parrot from the Disney Wishables line

A figurine set of the Auctioneer, the Pooped Pirate, Hook Hand Pirate, Redd, Skeleton Pillager, and Barker Bird
Add a photo to this gallery

Retrieved from "https://disney.fandom.com/wiki/Barker_Bird?oldid=4458349"
Community content is available under CC-BY-SA unless otherwise noted.