To bring his father back to life within 24 hours

Going on quests/adventures with his brother, snacks, driving, magic, his van Guinevere, Quests of Yore

Being called a screw up, Colt Bronco (at times), not being taken seriously, his father's death, ancient artifacts being torn down, being small (when Ian shrunk him accidentally)

His van, Guinevere
His Quests of Yore book

Able to speak briefly with his father before Wilden vanishes, gets a new van he names Guinevere the Second, and flies off in it with Ian on a new adventure

"Come, dear brother, our destiny awaits!"
"It's a wizard staff. Dad was a Wizard!"
"You have to speak from your heart’s fire."

Barley Lightfoot is an elf and the deuteragonist of the 2020 Disney/Pixar animated feature film, Onward. He is the older brother of Ian who serves as a mentor, protector, and best friend.

While his younger brother Ian is small, quiet, and awkward, Barley is large, loud, and excitable. Unlike Ian, he has memories of their father, and describes who he was and how he acted. He fully believes Ian can bring their father back to life and summon magic back to their world.

Although Barley is always optimistic and unafraid to press on, he has his own issues and regrets, as his last memory of his father was being too afraid to see him when he was sick and Barley was supposed to say goodbye. As a result of not being there for his father's final moments, Barley swore he'd never be afraid again.

Despite being a little teasing, Barley never loses faith in his brother, Ian and encourages him to rise above his (Ian's) own self-doubts and is always there for him; something Ian didn't fully realize until he recollected the journey they'd taken together fulfilled his check-list he'd originally made to spend time with their father.

Barley loves fantasy and quests despite the world moving on from that time and will fight to the death to protect artifacts from the time of magic, causing him to be a bit of an outcast among his fellow peers and unfairly called a “screw up” (which upsets him) by the police and one time by Ian.

Barley is a 19-year-old elf with a large and stocky build. He has blue skin and beard stubble. He has an armband tattoo on his right arm. He wears a black beanie and T-Shirt with a 'Q' on it, covered by a large blue vest with numerous patches and pins sewn on it, green army shorts, and large black and white sneakers.

Barley bears a resemblance to his mother, Laurel Lightfoot as he has her rounded face, nose, and sturdy, muscular physique.

Barley Lightfoot is introduced when Ian discovers his board game Quests of Yore, thinking his brother Ian is interrupting his gameplay. He then tells Ian that there is "a mighty warrior that he has to take out". After playing with his mother Laurel Lightfoot, she tells him to take out the trash. While planning to take out the trash, Barley overhears a dispatcher warning Officer Colt Bronco to be on the lookout for a runaway griffin. Colt stares at him giving him a warning that whenever the city attempts to tear down the fountain, he always catches him. Looking at the footage of Barley attempting to stop a construction site from demolishing the fountain, Laurel tells him that the world has to change even when the fountain he tried to stop has been in the land of mythical creatures.

Just as Colt sits down to play his board game Quests of Yore, he tells him that the game he is playing is not just a regular board game but rather a historically accurate scenario about what it was like before modern technology arrived. When Ian tells Barley to be careful of his father's sweatshirt he is wearing to which Barley tells him he doesn't remember his father wearing one, he tells Barley that he only had two memories of his father to which he denies telling him that he had three memories of his father. Ian then tells Barley and his mother about getting food for breakfast to which Barley offers him to kneel before him but Ian decides to do this later while planning to get breakfast.

Barley then arrives at the New Mushroomton High School area via van Guinevere where Ian tells his colleagues that he needs to go home where he tells his brother that in ancient times, birthdays are celebrated during solemn quests just as Barley takes him home. Upon receiving a wizard staff that once belonged to his father, Laurel tells Barley that he was an accountant to which the conversation becomes interrupted where Ian reads a quote said by his late father about magic before it became slowly scarce. Barley then looks at the instruction of how to use a Visitation Spell to which he explains that a rare Phoenix Gem is required to use this spell. After too many failed poses when using the spell, he, Laurel, and Blazey leave the room Ian is at. Barley then notices Ian using the Visitation Spell to revive his father to which the plan was unsuccessful due to Barley's interruption.

Barley and Ian later gaze upon the half-restored Wilden Lightfoot to which Barley explains that the spell he used to revive his father only lasts for one day at sunset. In a plan to find another Phoenix Gem, he explains to Ian that the Manticore's Tavern is the place where all the quests begin, which would be the only place to find the Phoenix Gem. Barley and Ian plan to start their quest via riding on their van Guinevere in a plan to arrive at the Manticore's Tavern. Barley then introduces his van Guinevere to his father and then tells Ian to practice using magic in order to revive his father just as the elf brothers continue their journey to the Manticore's Tavern.

On their way to the Manticore's Tavern, Barley insists Ian to speak from his heart in order to activate the spell he is using to which Ian has a hard time concentrating. Barley and Ian arrive at the Manticore's Tavern to get help from the Manticore. Upon entering, Barley then asks Corey for a map to find the Phoenix Gem to which she gives the two a kid's menu based on her old maps to which Barley prefers to show him and Ian the real map. Barley explains that he needs a Phoenix Gem to continuing reviving the elf brothers' father to which she denies as she explains that she is semi-retired from going on adventures. However, after Corey felt upset of who she once was before she became a restaurant owner, she angrily sets the tavern on fire just as Barley, Ian, and their late father escape. Upon escaping, Barley hands Ian the only surviving clue from the tavern to which Ian finds out that the clue is linked to Raven's Point (actually done by a customer named "Kayla"). Barley suggests going to Raven's Point using the Path of Peril path rather than the expressway.

On their way to Raven's Point, Barley and Ian's van runs out of gas to which Barley tells Ian to use a Growth Spell to enlarge the gas can (alongside the fuel inside it). Instructing him, he tells Ian that there must be no distraction while using the spell. However, the attempt to enlarge the gas can was unsuccessful as it accidentally shrinks Barley into a diminutive size. Ian, Barley, and their father arrive at the Swamp Gas area as the three notice a group of motorcycle fairies, the Pixie Dusters, offending an elf customer. Upon arriving in the station's mart, Ian asks a storekeeper for gas while Barley impatiently requests him to buy some Cheese Puffs and a bathroom key, increasing Ian's total cost.

Barley later argues with Dewdrop about the sprites' ancestors just as Ian, Barley, and their father escape via their van Guinevere. However, due to Barley's diminutive size, he tells Ian to hurry as the Pixie Dusters are approaching, telling Ian to start his engine immediately just as Ian drives his van to escape from the Pixie Dusters. During the chase, Barley tells Ian to follow the signs leading to Raven's Point while telling him to stay focused while fighting against the Pixie Dusters. Barley grows back to his normal size because the spell Ian accidentally used on him is temporary just as the police squadron arrives and prepares to arrest the two for reckless driving. Ian and Barley disguise themselves as Colt Bronco via Disguise Spell to avoid getting caught to which as the cops Specter and Gore notice the elf brothers going back to their van just as the spell wears off, Barley and Ian continue their quest. Barley then stops to get some Elixir energy drink from a soda machine to which Ian and Barley argue with each other about the things the elf brothers did wrong earlier to which their argument is interrupted when Ian and Barley dance with their father with the music playing in Barley's van.

Arriving at the Path of Peril, Barley explains about the dangers in the area to which they come across an enormous chasm where they see ancient drawbridge where Barley tells Ian to use a spell to help Ian activate the lever on the side of the drawbridge. Ian manages to activate the lever to lower the drawbridge to which the two finally arrive at Raven's Point to continue their journey. However, Colt Bronco prepares to arrest the elf brothers for reckless driving just as Ian and Barley escape via Guinevere to get to Raven's Point. However, noticing the police squadron is preparing to arrest the two, Barley sacrifices his van to block the police squadron's view.

Barley arrives at the same spot where he protested to stop the construction site from tearing down the fountain shown on Colt's video while Ian remembers the time of what he and Barley did when they were young children before they went on a quest. While the police squadron arrive again to arrest Barley, he places the flower-shaped piece on the fountain to reveal a Phoenix Gem to unleash a curse to summon an artificial dragon. As the dragon looks at Barley, it chases after the elf brothers and their father. Corey and Laurel manage to help the two defeat the dragon while Ian and Barley plan to complete reviving their father in order to give the two a buy some time to revive their father. Fortunately, Laurel helps Ian destroy the Curse Dragon using the Curse Crusher where Ian notices Barley having a brief conversation of his completely revived the elf brothers' father Wilden Lightfoot where he hugs him for the bringing back magic back to the land of mythical creatures before he dies again. Barley explains to him that he was once a wizard who is proud of Ian who grew up to be a wizard just like him. Barley and Ian embrace together after the success of reviving their late father.

During the epilogue, Ian and Barley ride on their new van Guinevere 2 as the two continue going on quests with magic brought back to the land of mythical creatures.

Barley and Ian as they appear at the Disney Parks 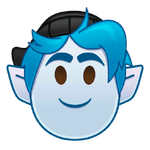 The Disney Wiki has an article focusing on the relationships of Barley Lightfoot.

Retrieved from "https://disney.fandom.com/wiki/Barley_Lightfoot?oldid=4331710"
Community content is available under CC-BY-SA unless otherwise noted.