Baron Von Steamer is a steampunk-inspired supervillain in Big Hero 6: The Series. He is the arch enemy of Boss Awesome.

He specializes in steam-based weapons, and has numerous death traps hidden within his lair. Like any classic villain, Baron Von Steamer tends to monologue, always bragging about how feeble his enemies are compared to him and how he will soon have his revenge upon Boss Awesome. Likely as a result of his age, he gets confused easily, like when he mistakes Wasabi for Fred, but stubbornly refuses to admit to them. When Fred exposes himself as the true son of Boss Awesome—while entirely masked by his costume—Steamer claims that he can see the resemblance.

Baron Von Steamer is an elderly man with a skinny build. He has a huge monocle mounted on his right eye and is outfitted with military officer garments and old metallic armor. Baron Von Steamer also bears a white goatee, side burns, and mustache.

Baron Von Steamer first appears in "Fred's Bro-Tillion", where he crashes Fred's party in attempts to kidnap the son of Boss Awesome. Mistaking Wasabi for Fred, Steamer kidnaps the former and retreats to his lair. Big Hero 6 consult Boss Awesome on the situation, and learn that Steamer has numerous lairs hidden throughout the city—most of which have been taken over and converted into Noodle Burgers restaurants.

Meanwhile, Steamer holds Wasabi captive in a cage over a pit of lava. In during which, he monologues about his plot, not knowing that Wasabi left a trail for his teammates to follow. Big Hero 6 eventually infiltrate Steamer's lair, and a battle ensues. Overpowered, Steamer takes his leave in an apparent forfeit, but this is not the case; Steamer quickly returns in a giant, mechanical spider-like war machine. With his weapon, Steamer greatly overpowers Big Hero 6, pinning each member down with the exception of Fred, who reveals himself to be the true son of Boss Awesome. Steamer checks his comic again and remarks that he sees the resemblance; he calls Wasabi a scoundrel for impersonating a Frederickson. Using his fire breath, Fred burns the legs of Steamer's machine and topples it over with his super jump. Defeated, Steamer swears vengeance on the young heroes before making an awkward escape.

Baron Von Steamer returns in "Steamer's Revenge", having sent a film reel to Fred's house, challenging Boss Awesome to a showdown if he valued San Fransokyo. As Mr. Frederickson tells Big Hero 6, Steamer had challenged him in the past, where Boss Awesome would allow himself to be captured, in which Steamer would foolishly reveal his evil plan before the hero gets free and thwarts him. Later on, Steamer finds Boss Awesome, who goes down after one puff of steam. Despite his suspicions at his archnemesis' skinny figure, Steamer rationalizes that Boss Awesome had been working out and takes him prisoner. However, Steamer had learns from his past defeats and refused to reveal his evil plan before he could execute it, to the point where he gags himself with tape to avoid the temptation. He then reveals that the giant Boss Awesome statue in San Fransokyo Bay was in fact a Baron Von Steamer statue in disguise, designed to pump water from the bay and destroy the city with steam. However, Hiro and Baymax use Overdrive Mode to destroy his water tank. Forced to switch to Plan B, Steamer transforms the torso of his statue into a submarine and fires three heat-seeking torpedoes at the city. Unfortunately for Steamer, Wasabi's rebuilt car redirects the torpedoes back at his sub, destroying it. Managing to make it to shore, Steamer is then cornered by Big Hero 6. Acknowledging the heroes' victory, he vows revenge, only to be pounced on by Boss Awesome, who nerve jabs and foot tickles him into submission. As he is thrown into the back of Wasabi's car, "Boss Awesome" tears off his mustache and Steamer realizes that he was in fact Fred. He starts to vow vengeance only for Go Go to slam the door on him in mid-sentence.

Baron von Steamer is featured in a flashback in "Countdown to Catastrophe", in which Honey Lemon and Wasabi find a phonograph with a recording of Steamer boasting of his latest plan to defeat Boss Awesome through use of a a cage suspended above a plate of free cookies, only to end up caught in his own trap. 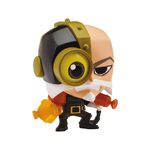