Sasha and Grime go on a quest to retrieve a legendary Warhammer.

The Toads from all four towers arrive at the summit of the North Tower to meet. Sasha, Grime, Percy and Braddock prepare a presentation with Grime revealing that Beatrix, the Captain of the West Tower, is actually his younger sister whom he used to tease and thus their presentation needs to be perfect. They announce their plan that the Toads all team up to take down King Andrias and take over Amphibia for themselves and the captains are supportive of the idea, but when Grime suggests that his team lead the uprising, the other captains turn him down. Sasha becomes furious, especially after learning that Anne and Marcy are working together, and insults them. Captain Aldo tells them that they will lead if they can retrieve Barrel's Warhammer, which Sasha agrees to.

Percy and Braddock inform Sasha that Barrel was a great warrior who defended a village and that his Warhammer was used to defeat a beast that still remains in its hiding place to this day. Sensing that they are scared, Sasha tells Percy and Braddock to give her a "kawaii signal" so that they can return home. The group arrive at a swamp and locate the hammer quickly, but discover that it is lodged on the head of a Narwhal Worm that awakens and moves about. Despite Percy and Braddock throwing the signal, Sasha insists they press on and hop onto the back of the worm. The hammer is stuck in its back and Sasha resolves to use a rope to grab the worm's horn and control it; sending it into the direction of the tower, much to the Toads' horror.

Grime informs Sasha to simply bail, but she angrily insists on getting the hammer to prove that she can make it without Anne and Marcy. She successfully pulls it and she and Grime use it to stop the worm before it crashes into the tower, though its horn breaks a window. The other Toads congratulate them on their successful effort and support their leadership. However, Percy and Braddock, hurt by the adventure, tell Sasha that she ignored them and that they no longer wish to serve her or work with her ever again and leave. Grime tells her that it is for the best as they have reached their limit. As the Toads plan their conquest of Amphibia, the Narwhal Worm sleeps outside of the tower. 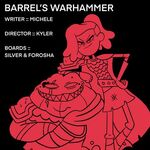