Disney Wiki
Register
Don't have an account?
Sign In
Advertisement
in: Vehicles, The Nightmare Before Christmas, Transportation

The Bathtub has the appearance of an old bathtub - rounded, unstable, dirty, and filthy. It has four legs to hold it up, and a faucet. It can hold up to at least four small people, which is suitable for the children, Lock, Shock, and Barrel.

The Bathtub is not an ordinary bathtub, as it is used as Lock, Shock, and Barrel's primary use of transportation. It appears to move on its own and have control over itself, and acts similar to that of a horse and horse carriage. It both neighs and walks like a horse.

The Bathtub made its first appearance in the film, used by the trio in order to kidnap Santa Claus and deliver him to Jack Skellington in preparation for Christmas.

When the trio sing through the "Kidnap the Sandy Claws" sequence, the Bathtub mostly appears in the background, unnoticed. It is until the end of the song where Barrel drains the tub and Lock and Shock throw their supplies and weapons into it when the tub becomes mobile and walks itself out of the hideout.

When the trio kidnap who they think is Santa Claus, they deliver him to Jack, carried in the Bathtub. However, Jack is disappointed, as they kidnapped the wrong person and went through the wrong door. The trio then goes back with the tub to return the Easter Bunny and retrieve the correct Santa.

Before the holiday festivities begin, Lock, Shock, and Barrel bring a bounded and bagged Santa to Jack by carrying him in the Bathtub. Jack is pleased, takes his hat, and demands the trio to find a safe spot for him until the holiday is over. They use the tub to carry Santa Claus to Oogie Boogie.

The Bathtub appears on The Nightmare Before Christmas map in Disney Crossy Road. It appears as a moving vehicle and obstacle the player must try to avoid during the playthrough. Hitting the tub will cause the player to lose, like all other mobile vehicles on the road in the game.

The Bathtub is what carries the trio in Disney Heroes: Battle Mode. When playing as Lock, Shock, and Barrel, the Bathtub will carry them and their weapons into battle, and will make neighing noises similar to that of a horse.

At the beginning of each battle, the Bathtub will enter carrying the three, and acts to that of a battle horse. 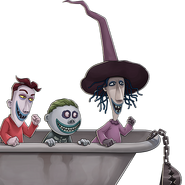 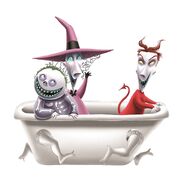 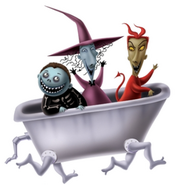