B1 Battle Droids (simply known as Battle Droids) are a series of combat droids from the Star Wars universe. The Trade Federation made extensive use of these droids and as the military force for the Confederacy of Independent Systems during the Clone Wars until they were outlawed by the Galactic Empire. They were created by the insectoid race known as the Geonosians and were produced in Geonosis' foundries in massive numbers. They also bore a resemblance to their creators, having a similar head shape and being thin and spindly.

During the Clone Wars, these droids would charge toward their enemies, firing their blasters. By Clone Troopers, they were referred to as "Clankers".

During the reign of the Galactic Empire, a small platoon of Battle Droids survived the shutdown code initiated by Darth Vader upon his murder of the Separatist leaders when their commander, a Super Tactical Droid named Kalani, correctly believed the shutdown order to be a trick and kept his forces operational and stationed on the planet Agamar. They would remain there until the arrival of Captain Rex, Ezra Bridger, Kanan Jarrus, and Garazeb Orrelios, who helped the Battle Droids to see that they and the clone troopers they once fought were never meant to win; they were pawns that had been played to destroy each other so that the Empire could take over. Seeing the logic behind this, the Battle Droids united with their former enemies to fight and escape the Empire. Afterward, the surviving Battle Droids departed with Kalani for parts unknown.

Klik-Klak, a surviving Geonosian who escaped the genocide of his race after helping to build the Death Star, also utilized battle droids he had salvaged to protect the last Geonosian queen egg, stationing them in the tunnels to deter or kill any intruders.

"Check it out, Corporal. We'll cover you." 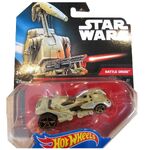