It is mainly used by military-security programs and hacker programs. Its main weapon is a large cannon mounted on top of the tank that can rotate 360°. Each tank holds one operator who acts as driver, gun operator, and radioman. Normally however, three programs are needed to operate a tank (especially for military operations), however one operator is enough, especially for hacking purposes. Tanks are not very fast, as Light Cycles can normally outrun them. However, light cycles, and the giant recognizers, cannot withstand the powerful energy projectile that tanks fire at enemies.

Hack tanks and military tanks can be distinguished by their tread color. Military tanks are usually green, while hackers are orange-yellow. They tend to adjust to match the circuitry color of the crew.

Although tanks have been known to fire at objects at a vertical axis (this is proven in TRON through several point-of-view shots) it has never been shown how the turret is capable of being raised upwards.

In the video game TRON 2.0, the tanks make a brief appearance as a foil to the main protagonist, Jet Bradley. They shoot at Jet while he attempts to activate a platform that will help him escape from them. The tanks are considered "read-only," computer jargon meaning that they cannot be derezzed. They are enemies only and cannot be operated by players.

In Tron: Evolution, Anon not only faced tanks as enemies, but on some occasions, he could drive them. In these segments, he had to blast his way through recognizers, sentries, and other tanks to get from one location to the other.

In Tron: Uprising, Tanks can also be seen partoling Argon, in We Both Know How This Ends, Beck disable the Tanks, bu were later taken to Able's Garage to be repaired, thanks to Link he was able to figure the code and restored th Tanks.

In TRON: Legacy, tanks can be seen in the hanger of the Rectifier, and one is also seen patrolling Tron City in several shots.

In the real world, tanks were featured in the ENCOM arcade game Space Paranoids, designed by Kevin Flynn, and later its internet counterpart, Space Paranoids Online. They were controlled by the player, and also served as enemies. They were also in the Tron Arcade Game. 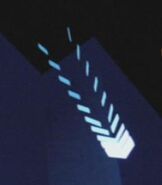 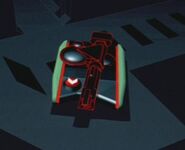 One tank falls over the edge.