Battle of the Bands

Amphibia
"Battle of the Bands"

Anne and her friends team up to enter the Wartwood Battle of the Bands contest.

With Wartwood slowly growing to accept Sasha and Grime's presence, Mayor Toadstool sets up a battle of the bands contest to make everyone feel happy. Anne, Marcy and Sasha decide to revive their garage band Sasha and the Sharps while Hop Pop and Sprig join Loggle and Wally to be part of their jug band and Polly and Frobo as visual support for Anne's band. As they practice, Sasha wants to perform her hit "Heartstomper", but Anne instead suggests a new song she wrote called "No Big Deal". While Sasha likes it, she begins to implement her controlling nature and leaves in a huff to perform with someone else, but still convinces her friends that they'll still have what they want this way.

After Grime turns her down for a solo act, as he takes it seriously (even though it wasn't a real battle) and intends to win, Sasha finds Toadie, who earlier was told by Toadstool to be on his own for once, and immediately recruits him to be part of a new duo. At first, Sasha is happy to have someone to control, but it quickly dawns on her that Toadie will say yes to anything as he gave up on opinions years ago. She calls it exhausting and wonders how someone can live without giving their opinion. Toadie explains that being in control is tiresome and that she should learn to let someone else be in control for once as it means that you support the person you care about the most.

As the battle of the bands contest begins. Everyone performs and Sasha sees Anne and Marcy in their new outfits for the performance. Sasha begins to regret her actions with Toadie supporting her; saying that she should be there for her friends. Anne and Marcy perform "No Big Deal" and Sasha forfeits her performance to do the guitar solo Anne had written for her; winning over the audience. As Sasha apologizes for being controlling, Grime comes out and performs a three hour harp solo that wins the entire crowd over; earning him first place. Anne announces that since this might be their last night in Amphibia that they should take a group photo, much to everyone's delight. 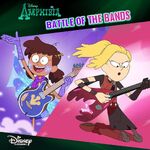