Bay Lake Tower at Disney's Contemporary Resort, commonly referred to as Bay Lake Tower, is the ninth Disney Vacation Club resort and the sixth located at the Walt Disney World Resort. It is the second Disney Vacation Club resort to be built in the Magic Kingdom Resort Area, following The Villas at Disney's Wilderness Lodge which opened in 2000. It officially opened on August 4, 2009.

While the tower is designated as a standalone Vacation Club resort hotel, the tower is considered an addition to Disney's Contemporary Resort and follows the same modern design. It occupies the land that was formerly used for a garden wing of the original A-frame tower.

In November 2006, Disney filed plans for a project on the site of the Contemporary Resort's North Garden Wing, and a construction fence was erected, encompassing the wing and part of its parking lot. On the North Wing site, Disney's Racquet Club was demolished by January 30, 2007. The North Wing itself was demolished between January 31, 2007 and April 6, 2007. Construction on the new building continued through 2007, with Disney never making an official announcement as to what was actually being built.

In February 2008, Disney won approval from the Florida Department of Business and Professional Regulation to begin selling Disney Vacation Club units at a property called "Kingdom Tower at Disney's Contemporary Resort." Approval was granted for an initial sale of 75 units, with the Kingdom Tower ultimately containing 281 time-share units. The approval did not, however, state when Disney Vacation Club would actually begin selling units; it said only that they could do so. In preparation for the future sale, Disney incorporated a condominium association for the property on January 9, 2008 that would manage the units.

The project was finally unveiled in September 2008 with its official name, Bay Lake Tower at Disney's Contemporary Resort.

The units are the most expensive yet offered by Disney Vacation Club, presumably because of their proximity to the Magic Kingdom. Some of the resort's features include full-length windows with views into the Magic Kingdom or onto Bay Lake. Some bathrooms on the Magic Kingdom side include movable partitions to permit watching the park's fireworks displays from the bathtub. Toward the top of the tower, there are several two-story units that contain large windows. Like all Vacation Club resorts, the one-bedroom, two-bedroom and grand villa units contain full kitchens.

Similar to the California Grill on top of the Contemporary, atop Bay Lake Tower is a lounge called "Top of the World Lounge." The lounge includes a viewing deck and also an indoor seating area with a full bar where appetizers are served. Only guests paying with Vacation Club member points may access the lounge from 5 pm until midnight. A cast member in the lobby will verify a guest's Vacation Club identification before allowing a guest access to the lounge. All guests may visit the viewing deck until 4 pm. The lounge features views of the Magic Kingdom theme park and Bay Lake, including its surrounding resorts. It is purported that on a clear day, the city of Clermont is visible from Top of the World Lounge.

Concept art of the hotel 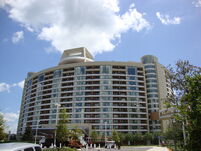 The large size of Bay Lake Tower (left) next to Disney's Contemporary Resort has been criticized.