Active
Baylene is a character in Disney's 2000 CGI film Dinosaur. She is an elderly, dainty Brachiosaurus.

Baylene is kind, but has a sense of loneliness due to being the last of her kind. She originally called herself "an old fool" for thinking she was worth anything due to her age, but thanks to Aladar, she learned to actually believe in herself. Indeed, she scolded Aladar for giving up when they were trapped in a cave and then provided most of the strength required to break down the wall.

Baylene is first seen when Aladar and his family run into the herd. As he heads in the opposite direction, he encounters Baylene with Eema and Url. After Aladar and his family decide to join the herd, the other members of the herd are instructed by Kron to find a place to sleep. As they do, they push and shove, much to Baylene's dismay. Aladar meets up with her and Eema and Url. After introducing themselves to each other, Eema reveals that Baylene is the last of her kind, implying that nearly all of the Brachiosaurs have died away thanks to the meteorite crashing towards Earth.

As Kron leads the herd to the far-off lake, Baylene comments that it looks like a long walk, and she is right. It takes many days to get to the lake, but once the herd arrives, they find that the lake is dried up. As the herd leaves, Eema goes to the lake bed, and moans about it. As Baylene walks to comfort her, Aladar hears something rumble under her feet. She lifts her foot, and Aladar and Zini dig a hole under it. Aladar then tells Baylene to press her foot in the hole, and out comes water. Aladar roars to get the herd's attention. Soon, the friends drink, until Kron and the herd come in and push and shove over the water, despite Aladar saying that there is enough for everyone.

The next morning, the herd is suddenly awoken by Bruton. As Carnotaurs are nearby, Kron ushers the herd to move out quickly. Aladar then confronts Kron about slowing down for his friends, which leads to a brief battle between the two. Then, Aladar runs to tell his friends of the Carnotaurs. As he hurries, he sees that his friends are struggling, and slows down for their sake, albeit losing the herd.

As the group walks, they find Bruton seriously hurt. After he rejects their help, they head into a cave. Soon, Bruton joins them. Later that night, the Carnotaurs attack. Everyone heads deeper into the caves as Bruton fights the Carnotaurs, killing one, although he dies, too.

The group keeps walking and sees a dead end. After Zini and Suri smell something, they dig at the dead end and make a hole, with a beam of light shining through. As Aladar tries to break the wall, the hole is covered up by falling rocks. As he keeps trying and failing, he begins to lose hope until Baylene scolds him for just giving up. She then helps to break down the wall. As she delivers one more hit to the wall, it collapses, and there in front of them is the Nesting Grounds. Then Baylene, calling Zini an amateur at jumping into water, jumps in the lake, which causes a good size wave compared to a lemur.

At the end of the movie, after Aladar leads the herd to the Nesting Grounds, she along with Aladar's other friends and family come to see Aladar and Neera's eggs hatch. After the first one hatches, Aladar roars in triumph, which is joined by his family, friends, and soon the whole herd.

Baylene from the Dinosaur game 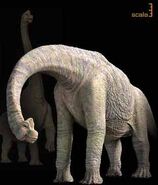