When reinserted by Honey Lemon, restores Baymax back to his nursing, non-threatening personality
Restores Baymax's personality and memories upon being inserted into a rebuilt Baymax

“Programmed with over 10,000 medical procedures, this chip is what makes Baymax...Baymax.”
―Tadashi Hamada[src]

Baymax's Chip is an object featured in Disney's 2014 animated feature film, Big Hero 6. It was created by Tadashi Hamada in order to make Baymax the nursing robot that he was intended to be. It is a green-colored chip with an icon of a smiling doctor and a sticker with the name of its creator on it.

The chip was temporarily removed by Hiro Hamada, who had earlier inserted a red chip consisting of fighting moves, when he ordered Baymax to terminate Yokai. If the green chip is removed and the red chip left inside, Baymax can become aggressive and dangerous. Luckily, Honey Lemon found the chip and reinserted it back into Baymax, restoring the robot to his peaceful, nursing personality.

While in the portal, Baymax removes the chip before being deactivated by Hiro. Later, Hiro discovers the chip clenched in Baymax's rocket fist while attending the San Fransokyo Institute of Technology, giving him the ability to rebuild Baymax and using the chip to restore his memories and adorable personality.

Hiro inserting the fighting chip into Baymax for the first time

Healthcare chip in Baymax's gauntlet in Big Hero 6: The Series 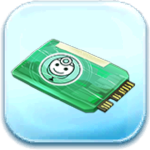 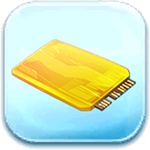 The Healthcare chip icon as the keychain on the Big Hero 6 Keyblade in Kingdom Hearts III.