"Baymax Returns" is a one-hour television movie that serves as a sequel to the 2014 Walt Disney Animation Studios film, Big Hero 6, as well as the pilot for Big Hero 6: The Series. It premiered on November 20, 2017.

After saving the city from Callaghan's wrath, Hiro attends to his first day at San Fransokyo Tech. Secretly nervous, his friends help him out and show him around the school. Along the way, Hiro passes Tadashi's lab. He takes a look inside, remembering his brother and friend, Baymax. He still misses them both, as do Honey, Wasabi, Fred, and Go Go. Hiro leaves Baymax's rocket fist on a table when he discovers his original healthcare programming chip within the palm of the fist. This encourages Hiro to recreate Baymax, using Tadashi's blueprints to rebuild his body and the chip to restore his personality and memories. He is just about to get started, when the new dean of San Fransokyo Tech, Professor Granville, sends him out of Tadashi's lab. She tells him that private labs are not permitted to first semester pupils, and if he wants his own lab he will have to earn it as his brother did. Later that evening, Fred wants to continue being a superhero, while the others wish to return to their normal lives.

Hiro uploads Baymax's Chip into Tadashi's computer, reviving his memories and personality. For the next few days, Hiro works tirelessly to recreate the robot, beginning with his skeleton. He completes the skeleton, but Baymax advises Hiro to run a full diagnostic before activating it. Being impatient, Hiro ignores the crucial diagnostic exams, and powers up the skeleton. Then just when he thought all was going well, it suddenly goes haywire and runs loose. Meanwhile, Fred and the others are out on the streets in their super suits. On their first night patrol, they stop a car thief, which only turns out to be a husband rushing his pregnant wife to the hospital. Elsewhere, Hiro chases Baymax's skeleton through the city until it ends up in the hands of Yama's gang. After discovering that Hiro is a student at San Fransokyo Tech, Yama spares his life and strikes a deal, ordering Hiro to steal a paperweight from Granville's office in exchange for Baymax's skeleton. His mysterious contact wants this paperweight for some unknown reason. With help from Fred, Hiro does so, though Yama betrays him and tries to kill the duo. Go Go, Wasabi, and Honey come to their rescue, and retrieve both Baymax's skeleton and Granville's paperweight.

Hiro returns Professor Grandville's paperweight and gets back to rebuilding Baymax. This time he runs the full diagnostic. Then after fitting the skeleton with the inflatable vinyl covering and inserting the chip, Baymax comes back to life. Unfortunately, Yama mass produced Baymax's skeleton while it was in his possession, creating an army of minions bent on stealing Granville's paperweight. Meanwhile, Fred again tries to convince his friends to continue being superheroes. He even came up with a name for their team, "Big Hero 6", and had a "HALP" superhero signal made, but nobody is tempted. He tries everything to convince them, especially Hiro, but still, none of his friends are interested in resuming their lives as superheroes. Eventually, Fred gives up.

Suddenly, the city comes under attack by Yama's Baymax army. The authorities are unable to stop them, so Go Go, Honey, Wasabi, and Fred suit up to intercept, while Hiro goes back to Tadashi's lab to rebuild Baymax's armor. Speaking with Baymax, Hiro feels guilty for what is happening. Go Go, Honey, Wasabi, and Fred manage to fight off the robots, and Hiro discovers the attack is a diversion when he spots Yama sneaking around the school. Hiro and Baymax follow him to Professor Grandville's office, no doubt going after the paperweight. Baymax impersonates as one of Yama's robots and takes the sculpture before Yama shows up. He almost gets away but is unable to ignore his healthcare protocol when Yama hurts himself. Yama has his robots hold Baymax down, only for Hiro to save him. In the process, a piece of the paperweight breaks off, revealing inside an extremely powerful energy source that appears to amplify anything electronic to a dangerous level. Yama escapes with the entity as Go Go, Honey, Wasabi, and Fred arrive in time to save Baymax from falling. Hiro and Baymax suit up, and the whole team goes after Yama. He tries to take the monorail but loses the entity when it melts through his pocket. It attaches itself to the train that Aunt Cass is on, and causes it to go dangerously fast. The six heroes see the train is on a collision course for the central station. Wasabi and Go Go cut off the carriages from the rest of the train, and Honey uses some elastic gunk to bring them to a stop. Hiro removes the entity from the train, but at the same time, it overcharges Baymax's systems. They shoot off up into the sky out of control. Hiro holds tight to the overpowered entity, which is ready to explode. Once over the clouds, Hiro reverses the polarity of his gloves and launches the entity into the sky moments before it explodes. Once away from the entity, however, Baymax's systems crash, causing the two of them to fall back down to the city. In a hurry and with a bit of a struggle, Hiro manages to reboot Baymax's systems. He comes back online and takes flight just in time.

Following these events, Hiro visits Granville in her office. He admits that while Tadashi will continue to be an inspiration, he must find his own path and handle life his own way, regardless of how unconventional these methods may be. At the same time, Hiro and his friends decide to continue their lives as superheroes. Devoting themselves to helping those in need as the team known as Big Hero 6. Unbeknownst to them, the mysterious person Yama was working for is now monitoring the team. 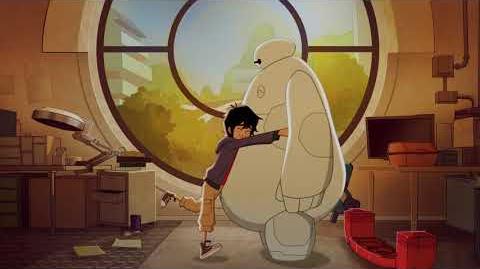 Honey, Wasabi, and Go Go to the rescue

The whole team together again

Retrieved from "https://disney.fandom.com/wiki/Baymax_Returns?oldid=4007645"
Community content is available under CC-BY-SA unless otherwise noted.