Let's Go to the Circus!
Beach Party at Walt Disney World is a Disney home video, originally released as part of the Mickey's Fun Songs series on June 30, 1995, and then re-released as a Sing-Along Songs video in 1996.

Now your kids can join Mickey and the gang in fun-filled musical adventures while learning easy-to-sing favorite kid songs! In Beach Party at Walt Disney World, Mickey, Minnie, Donald, Goofy, Pluto, Tigger and the Fun Songs Kids hit the waves and have a ball at Blizzard Beach, Typhoon Lagoon, Shark Reef and more. What a cool place to have oceans of fun!

Mickey and the gang are having a big beach party.

The film starts out with the kids are shown playing their favorite games like basketball, ring toss, hopscotch, and jump rope. Mickey and his friends, Minnie, Donald, and Goofy surprise the kids, and the kids are happy to see them. Later on, they all are joined by Pluto, and after a while they head to the beach and they get ready to have fun and spend the day together ("Celebration").

The Disney gang is very happy and some of the characters exclaim about whatever they like at the Walt Disney World beach. Mickey tells Donald to check his list to see if the whole gang is complete. But Caitlin gets sad because she wants more friends, but Tiffany tells her that it's easy to make friends by introducing one's self, talking with a person, and hanging out with him or her; and soon the girls and their friends join together and set their names free ("Set Your Name Free").

Next, the whole gang decides to go to Typhoon Lagoon where Goofy is ready to surf; as Mickey, Minnie, Donald, Tigger, and the others (who are on the sand) dance to "Surfin' Safari", and Goofy, and the others surf by. After the song, Donald notices that he cannot get out of the hole.

Then the kids take photos at Shark Reef, and then they see see Mickey who greets the guests and then the kids start snorkeling in the water where there are lots of fishes and other sea creatures; even some of the other characters including Mickey join the kids in snorkeling ("Three Little Fishies").

After that, Brendon finds a golden coin and shows it to the boys, and one of the boys says that the coin reminds him of pirate treasure. Soon, the boys are taken to a pirate ship where the pirates sing and dance to "A Pirate's Life". Suddenly, Captain Hook and Mr. Smee appear, as Captain Hook tells Smee to "report at once" and makes the guys stand in line. Peter Pan then shows up and starts to fight Captain Hook, and soon Captain Hook is defeated. The guys cheer and sing the last line of "Yo Ho (A Pirate's Life for Me").

Meanwhile, Ariel sings jovially, as the girls notice her and stay with her for a while ("Part of Your World").

Goofy, and the kids notice something funny and weird in this place; well of course it is Blizzard Beach. Goofy notices that every beach is hot. So he and the other characters (in this conversation group,) take the kids on a tour at Blizzard Beach ("Hot, Hot, Hot").

On the way to the luau, Donald, Chip, Dale and the kids sing "The Hukilau Song" at the Polynesian Village Resort. As the get to the luau, the hula performers, even Mickey, Minnie, and the other characters provide them leis and only the girls grass skirts. Everybody is ready to join the Hawaiian dance, and the dancers dance and sing their favorite Hawaiian song "Pearly Shells".

As the sun sets, Mickey says that it's time for the next party, taking place as the Electrical Water Pageant goes by on the Seven Seas Lagoon, just so as everybody does limboing ("Limbo Rock") and dancing with all of the others ("Slicin' Sand").

The 1996 VHS release of Beach Party at Walt Disney World. 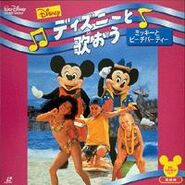 The 2005 DVD release of Beach Party at Walt Disney World. 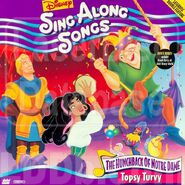 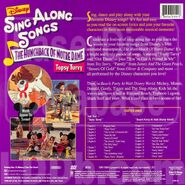 The 1996 laserdisc release, with Disney's Sing-Along Songs: Topsy Turvy (back)

Mickey, Tiffany, and Caitlin during "Celebration"

Sancha laughing at Goofy on his surfboard

Sancha singing along with Ariel