Being yelled at, nobody wanting his help

In 1989, Bean joined the cast of The Jim Henson Hour, appearing in both the control room and "televised" portions of the MuppeTelevision segments. Although his fellow Muppets often found him to be insufferably cute, the MuppeTelevision ratings were never higher than when the station featured sex, violence and/or Bean Bunny. Whenever Bean was yelled at, particularly by Kermit, he became very scared and whimpered, mostly due to his youth and his sensitivity to noise, a common trait he shares with real bunny rabbits.

Bean Bunny was further integrated into the Muppet family in 1990, playing major roles in The Muppets at Walt Disney Worldand Muppet*Vision 3D. In the former, he responds to Scooter'sjibe that "cute" is his middle name by stating it's actually Norman. A walk-around version of Bean was also featured in both Muppet stage shows at the Disney-MGM Studios in Walt Disney World: Here Come the Muppets and Muppets on Location: Days of Swine and Roses. It is indicative of the push to make Bean Bunny a major player in the Muppet family that walk-around versions of more established characters such as Scooter and Rowlf were not featured in these stage shows.

An animated version of Bean Bunny was introduced during the seventh season of Muppet Babies, and a pre-teen Bean would later be featured as part of the Muppet Kids series.

Bean was active as a main character only until Steve Whitmirebegan performing Kermit the Frog (following the death of Jim Henson), while Whitmire's other character Rizzo the Rat gained more prominence in the next major Muppet production, The Muppet Christmas Carol. The film was Bean's only significant role in a Muppet movie, appearing in several scenes as a hapless urchin, who on Christmas morning fetches a turkey twice his size for Scrooge.

In subsequent appearances on Muppets Tonight, Muppets from Space, It's a Very Merry Muppet Christmas Movie and The Muppets' Wizard of Oz, Bean was relegated to the background and became a routine target of Muppet violence, a fact that Brian Henson noted in the Muppet Christmas Carol DVD commentary: "Inside the Muppet Company, we love to hate Bean Bunny."

Frank Oz once said of the character, "Jim built a character named Bean Bunny, so people could think he’s cute, and take the onus off of the others[.] But, it didn’t work — they still thought the others were cute."

Bean made a cameo appearance in the second issue of the Muppet Robin Hood comic book and plays Michael, the youngest of the Darling children, in Muppet Peter Pan.

Since 2015, a Bean Bunny puppet is on display at the Center for Puppetry Arts as part of their permanent Worlds of Puppetry exhibit.

His most recent appearance was in a photo in an episode of the Muppet Babies reboot. 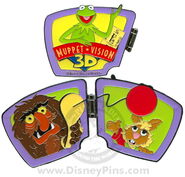 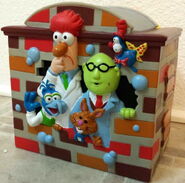