This article is about the Marvel Comics character. For the Disney character of the same name, see Beast.

Prof. Henry "Hank" McCoy, also known as Beast, is a Marvel Comics character who is a mutant with blue fur and beastly agility.

Beast was created by Stan Lee and Jack Kirby.

Beast makes a brief cameo on a television screen as his human counterpart Hank McCoy. He is portrayed by Steve Bacic.

Beast is a member of the cabinet of the President of the United States, serving as Secretary of Mutant Affairs. After a "cure" for human mutation is developed and weaponized, he resigns from his position in the government and helps the X-Men fight Magneto's forces on Alcatraz Island. He ultimately injects Magneto with the cure. After the incident, he is appointed United States Ambassador to the United Nations.

Beast appears in portrayed by Nicholas Hoult In the film, he originally possesses only prehensile feet and enhanced speed, agility and reflexes. He attempts to cure himself of his mutation with a serum derived from Mystique's DNA, but this causes his transformation into his familiar blue-furred feline form. Starting from this film he has a crush on Mystique.

X-Men: Days of Future Past

Hoult and Grammer returned as Beast in the 2014 film, X-Men: Days of Future Past. Hoult revealed to Joblo that Hank created a serum which controls his mutation, making him appear human unless he gets angry. Grammer reprised his role as the older Beast in a cameo at the end of the film.[93] When asked by the younger Beast if he is alive in the future, Wolverine tells him that he is not. A viral marketing website for the film shows that Beast was killed in 2015 by an angry mob of human protesters outside his home in upstate New York. Wolverine's actions in the past – during which he interacted with the younger Beast and warned him and Xavier about the future – create a new timeline where Beast is alive, with Wolverine seeing the older Beast walking through the Xavier Mansion when he returns to the future.

Beast, along with a few other members of the X-Men appear in a brief cameo. They can be seen conversing in another room, while Wade is in the X-Mansion, complaining the studio haven't allowed them to bring in one of the more famous members of the team. Beast quickly closes the door to the room he and the rest of the X-Men are in during Wade's rant, without him realizing it.

Beast can be seen on Fury's wall of Skrull suspects in the episode "Infiltration".

Spider-Man imagines the musical "Mutant and the Beast" starring Mystique and Beast.

Beast is seen alongside Cyclops during the Avengers' party. 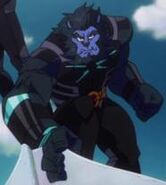