was a section that was to be built in Disney's Animal Kingdom. The section was never built and the land that was to be used for this area was turned into Camp Minnie-Mickey and later Pandora: The World of Avatar. 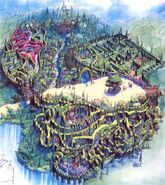 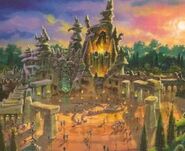 Remnants of the never-made land can still be found in the park. Though, as with Hidden Mickeys, you have to look close. For example, there is a section in the parking lot labeled "Unicorn". The Animal Kingdom logo also features a silhouette of a dragon. Inside the park, a dragon-shaped stone fountain can be found in Camp Minnie-Mickey. A detailed dragon head statue is found atop one of the ticket booths at the park's entrance. By far, the biggest examples of Remnants would be a cave in Camp Minnie-Mickey that exhorts blasts of fire. Guests are often told that a fire-breathing dragon lives there. Outside the cave, suits of armor are displayed.

Despite regaining a bigger budget, the idea for was scrapped. In Spring 2011, James Cameron of Titanic and Avatar fame was approached by Bob Iger to talk about the possibilities of attractions or, possibly, a land dedicated to Avatar. The idea was made official in September, where a long-term exclusive deal was signed between and James Cameron's Lightstorm Entertainment and Fox Filmed Entertainment that said an Avatar-themed area was able to be created. More specifically, a land to be built on the land that was to have occupied. The land would also feature more mythical creatures to inhabit the park.

Retrieved from "https://disney.fandom.com/wiki/Beastly_Kingdom?oldid=2989534"
Community content is available under CC-BY-SA unless otherwise noted.