Beauty and the Beast (video game)

Beauty and the Beast is an action, platformer for the SNES. It was developed and published by Hudson Soft in North America and Europe in November 1994 and February 23, 1995, respectively. An NES version was released in Europe only on the same year and was developed by Probe Software.

The game was published by Virgin Interactive in Japan on July 8, 1994. The entire game is played through the perspective of the Beast. As the Beast, the player must get Belle to fall in love so that the curse cast upon him and his castle will be broken, she will marry him and become a princess. The final boss of the game is Gaston, a hunter who will try to steal Belle from the Beast. There is even a snowball fight scene in the middle of the game and cutscenes between stages that tells the story of the movie. 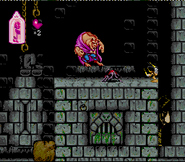 Cover to the NES version 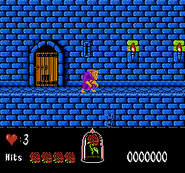 Gameplay from the NES version