Pete's Dragon
Bedknobs and Broomsticks is a 1971 musical film produced by Buena Vista Distribution and distributed by Walt Disney Pictures. It combines live action and animation, which was released in North America on December 13, 1971. Based upon the books The Magic Bed Knob; or, How to Become a Witch in Ten Easy Lessons and Bonfires and Broomsticks by Mary Norton, it stars Angela Lansbury and David Tomlinson.

The film has similarities to Mary Poppins (1964): combining live-action and animation and partly set in London. It shares some of the cast, namely Tomlinson, supporting actor Reginald Owen, minor actor Cyril Delevanti, a similar film crew, songwriters the Sherman Brothers, director Robert Stevenson, art director Peter Ellenshaw, and music director Irwin Kostal. It is one of the final films to be produced before Roy O. Disney passed away.

During the 1940 London Blitz, Charlie, Carrie, and Paul Rawlins are evacuated to the small village of Pepperinge Eye, where they are placed in the care of Miss Eglantine Price, who is reluctant to take them in, but has to due to a special order and Mrs. Hobday tells her that with the number of children that arrived that day, she has to find homes for everyone at such short notice. The three children learn that Miss Price is an apprentice witch, who wants to use her witchcraft to aid the war effort. In exchange for their silence, she casts a spell on a bedknob that Paul removed from the brass bed in their room. When reattached to the bed, it will travel anywhere he asks. Before they can test out the knob, however, the local reverend comes by with a letter and it is from her teacher. He has written to Miss Price to tell her that the school she had been learning from has been closed down due to the war, and because of that she will not be receiving a lesson which she was very anxious to receive.

She tells them their first trip is to go back to London to locate the headmaster of Miss Price's correspondence school. While Carrie and Paul are excited to test out the new bed, Charlie does not believe the bed works. However, when Miss Price's black cat scares him he jumps on the bed right before he leaves. They soon arrive in London, there they meet Professor Emelius Browne, who's in reality a con-artist and who created the Correspondence College of Witchcraft using what he believed were nonsense passages in an old book about a wizard named Astoroth. He is surprised to learn that the spells actually work for Miss Price.

Miss Price asks to see the book, and Professor Browne takes them to an abandoned mansion where he is currently residing. While the children explore it, he shows Miss Price the book (although he does burst into song and show her some plans he has), which is actually torn in half, thus explaining why he closed the school before sending out the final spell, one that she believes will greatly help her cause. He tells her that he bought it from the bookseller at a street market but because he gave the bookman what he believed to be a dud coin, they each got half the book. She, Professor Brown, and the children travel to Portobello Road to search its many stalls and carts of old books.

But their search attracts the attention of a spy named Swinburne, who works for a man known as the Bookman. After the street market closes for the day, Swinburne takes the entire group, including the magical bed, to see him, who is revealed to possess the other half of the book. He and Miss Price exchange their halves, but the completed text only says the spell is inscribed on a medallion known as the Star of Astoroth. The Bookman tells them that, during Astoroth's life, he used his magic to imbue animals with anthropomorphism, or give them human qualities. However, they rebelled against him, killed him, stole many of his magical possessions, and traveled to an unknown island. When the Bookman names it, Paul realizes it's the one described in a children's book he took from Professor Browne's house. He asks Paul to give it to him but he refuses, which prompts a tense standoff.

Before the Bookman can get the book, Miss Price, Professor Browne, and the children escape on the bed and travel to the Isle of Naboombu. Initially landing in a nearby lagoon, they go underneath the Beautiful Briny Sea, where Miss Price and Professor Browne win a dance contest at the Briny Ballroom, an underwater nightclub, until the bed, with the children on it, is caught by a bear who is fishing in the lagoon. He reveals that no people are meant to be on the island by order of King Leonidas, but Paul does point out that in the book, anyone is allowed to see the king, whether they are humans or animals. Miss Price then asks the bear to lead them to the kingdom. He leads them to meet the king, who's a lion (whose voice is an imitation of Robert Newton). He is upset because nobody has volunteered to referee a royal soccer match. Professor Browne convinces him he can do so, and he observes the Star hanging on King Leonidas' neck. The game becomes a silly contest among the animals, where the rules are made up on the spot, and Professor Browne tries in vain to grab the Star from King Leonidas while being knocked down repeatedly by the animals. Following the game, he secretly switches the Star with his referee's whistle. Furious, King Leonidas runs after them to get it back. But Miss Price turns him into a rabbit.

They use the bed to return home, only to discover that the Star has disappeared, as it can't leave the fantasy world. Fortunately, Paul reveals that the words of the Substitutiary Locomotion spell have been in his book all along. Miss Price attempts it, which gives inanimate objects the ability to move on their own but is unable to control it. After a feast of sausages and mash, Miss Price is still unhappy that the spell doesn't work, so to cheer her up, Mr. Brown does some juggling. After accidentally stepping on the cat's tail, an apple lands in the gravy and makes a mess, but Miss Price and the children think it's very funny and laugh. Seconds later, Mrs. Hobday has arrived to tell Miss Price that she found someone to take care of the children. The local Milkman and his wife would be happy to raise the children on their farm; however, Miss Price tells her that things have changed: she has grown fond of the children, and the children say that Mr. Brown has become like a father to them. After Mrs. Hobday leaves, the children ask if he can stay on; however, Mr. Brown says he is going to return to London. He says goodbye to Miss Price and the children, after the children go to bed, Miss Price cleans up and while she does, she sings about how she prefers to live alone (Nobody's Problems).

That night, a German raiding party invades Pepperinge Eye and commandeers Miss Price's house. She and the children are captured and taken to the museum inside the old castle. Professor Browne, while waiting overnight at the station for the first train to London, discovers other Germans engaging in acts of sabotage. He realizes that Miss Price and the children are in danger, returns to the house, breaks in, but hears Miss Price's cat, Cosmic Creepers, meowing very loud. He tries to quiet him, but the Germans hear him and go inside to investigate. Professor Browne goes into the room where Miss Price keeps her spells and figures out how to turn himself into a rabbit and it works. He escapes the Germans and the house and then joins the others at the castle. After reverting to human form, he suggests the Substitutionary Locomotion spell be cast on the old uniforms and weapons in there. Miss Price agrees and uses it to create a magical army of medieval Knights, Elizabethan Guards, Cavaliers, Redcoats, and Highlanders.

The Germans, unable to stop the seemingly invincible army, retreat back into the sea but not before destroying Miss Price's workshop as a small act of revenge. The explosion knocks her from the sky, where she had been directing the magical attack astride her broomstick, breaking the spell. Meanwhile, all the Old Home Guard soldiers have received word about the German soldiers coming ashore, they manage to send them away. While Miss Price may not be a witch again, she never really believed in being a proper witch at all. The next morning, Professor Browne enlists in the war and departs (with an escort from the local chapter of the Home Guard) while the children are unhappy, and think that without the spells it won't be fun anymore, but Paul reveals he still has the bedknob, implying that they can at least go anywhere they like. The film ends with The Old Home Guard marching off to fight while singing.

The film was originally intended to be a large-scale epic holiday release similar to Mary Poppins, but after its premiere, it was shortened from its two and a half-hour length (while the liner notes on the soundtrack reissue in 2002 claims it was closer to three hours) to a more manageable (to movie theatres) two hours. Along with a minor subplot involving Roddy McDowall's character, three songs were removed entirely, and the central dance number "Portobello Road" was shortened by more than six minutes.

Upon rediscovering the removed song "A Step in the Right Direction" on the original soundtrack album, Disney decided to reconstruct the film's original running length. Most of the film material was found, but some segments of "Portobello Road" had to be reconstructed from work prints with digital recoloration to match the film quality of the main content. The footage for it was never located; as of 2009, it remains lost. A reconstruction of it, using the original music track linked up to existing production stills, was included on the DVD as an extra to convey an idea of what the lost sequence would have looked like. The edit included several newly discovered songs, including "Nobody's Problems", performed by Lansbury. The number had been cut before the premiere of the film. Lansbury had only made a demo recording, singing with a solo piano because the orchestrations would have been added when the picture was the new material. The extended version of the film was originally released on laserdisc in 1996, and on DVD in 2001 for the 30th anniversary.

The reconstruction additionally marks the first time the film was presented in stereophonic sound. Although the musical score was recorded in stereo, and the soundtrack album was presented that way, it was released in mono sound.

A shorter version of the film was reissued theatrically on April 13, 1979, removing all songs, excluding "Portobello Road" and "The Beautiful Briny Sea". Even the Oscar-nominated "The Age of Not Believing" was removed.

A new edition DVD called Bedknobs and Broomsticks: Enchanted Musical Edition was released on September 8, 2009. This single-disc edition contains the extended version of the film, the Sherman Brothers Featurette (available on the old DVD), a new Special Effects documentary and the lost song "A Step in the Right Direction".

The film was released as a Special Edition on Blu-ray on August 12, 2014 which reverted the movie back to the running time of the theatrical cut, with the deleted scenes and songs included as bonus features.

When it was released on Disney+, several scenes and songs were cut due to using the 117 minute print from the Blu-ray.

The film received five Academy Award nominations and won one. 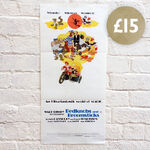 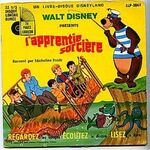 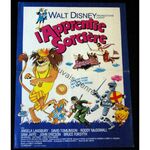 The magic bed as it appears in Disney Infinity