Large man wearing overalls, and had a axe on his head.

"Bunny!"
Behemoth is one of the residents in Halloween Town in the film, The Nightmare Before Christmas.

Behemoth is a Halloween Town resident that speaks rarely in a simpleton voice.

An deleted verse of "Making Christmas" would reveal he had a lovely singing voice and give him a big solo moment.

Behemoth appears in the video game as a supporting character. It is revealed he's in charge of the pumpkin fields, cultivating them all year and getting them ready for Halloween. According to Mr. Hyde, his pumpkins are the best of Halloween Town and he's very protective of them.

"Bunny!"
Add a photo to this gallery 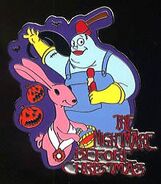 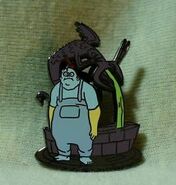 Retrieved from "https://disney.fandom.com/wiki/Behemoth?oldid=3954979"
Community content is available under CC-BY-SA unless otherwise noted.