Tristan Klier (2011-2015)
Gregg Sulkin (2015-2016)
Tyler Posey (2016)
Annabella Avery "Bella" Thorne is an American actress, voice actress, singer, dancer, director, and model. She is well known for her role as Cece Jones on the Disney Channel original series Shake It Up and again on Good Luck Charlie. She also played Avalon Green in the 2012 DCOM Frenemies. In addition, she guest starred in the Disney Channel show, Wizards of Waverly Place, the reality series PrankStars, voiced Brigette in the Phineas and Ferb Halloween special "Night of the Living Pharmacists", and played Anthony's girlfriend Celia in the 2014 Disney fantasy-comedy film, Alexander and the Terrible, Horrible, No Good, Very Bad Day. She guest starred as Jolie in a special episode of K.C. Undercover.

She has released a few songs as well, including Watch Me, a collaboration with Zendaya, and her debut solo song TTYLXOX, which barely charted upon its release. 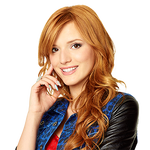 CeCe Jones
(Shake It Up) 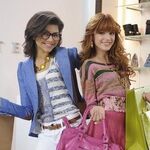 Jolie
(K.C. Undercover)
Add a photo to this gallery

Bella Thorne at premiere of Alexander and the Terrible, Horrible, No-Good, Very Bad Day in October 2014.

Retrieved from "https://disney.fandom.com/wiki/Bella_Thorne?oldid=4507483"
Community content is available under CC-BY-SA unless otherwise noted.