Beauty and the Beast: Belle's Quest

"Belle" is a song written by lyricist Howard Ashman and composer Alan Menken for Walt Disney Pictures' 30th animated feature film Beauty and the Beast. Originally recorded by actress Paige O'Hara and actor Richard White, "Belle" is a French and classical-inspired song that incorporates musical elements from both the Broadway and musical theater genres.

The film's first song, "Belle" is a large-scale operetta-style musical number that introduces the film's book-loving heroine Belle, a non-conforming young woman who has grown weary of the provincial village life that she is being forced to live, and Gaston who desires her hand in marriage. The reprise mentions how she not only wants to give up her village life but also not accept Gaston's hand in marriage.

Belle: Little town, it's a quiet village
Every day like the one before
Little town, full of little people
Waking up to say

Belle: There goes the baker with his tray, like always
The same old bread and rolls to sell
Every morning just the same
Since the morning that we came
To this poor provincial town

Baker: Good morning, Belle!
Belle: Good morning, Monsieur.
Baker: Where are you off to?
Belle: The bookshop! I just finished the most wonderful story, about a beanstalk and an ogre and-
Baker: That's nice. Marie! The baguettes! Hurry up!

Townsfolk: Look there she goes, that girl is strange, no question
Dazed and distracted, can't you tell?
Woman: Never part of any crowd
Barber: Cause her head's up on some cloud
Townsfolk: No denying she's a funny girl that Belle

Belle: Oh, I couldn't put it down. Have you got anything new?

Bookseller: Not since yesterday.

Bookseller: That one? But you've read it twice!

Belle: Well, it's my favorite!
Far off places, daring swordfights, magic spells, a prince in disguise!

Bookseller: If you like it all that much, it's yours!

Belle: Well, thank you.
Thank you very much!

Townsfolk: Look there she goes, that girl is so peculiar
I wonder if she's feeling well
With a dreamy, far-off look
And her nose stuck in a book
What a puzzle to the rest of us is Belle

Belle: Oh, isn't this amazing?
It's my favorite part because you'll see
Here's where she meets Prince Charming
But she won't discover that it's him 'til chapter three!

LeFou: Wow! You didn't miss a shot, Gaston! You're the greatest hunter in the whole world!
Gaston: I know!
LeFou: Huh. No beast alive stands a chance against you...and no girl for that matter!
Gaston: It's true, Lefou, and I've got my sights set on that one!
LeFou: The inventor's daughter?
Gaston: She's the one! The lucky girl I'm going to marry.
LeFou: But she's-
Gaston: The most beautiful girl in town.
LeFou: I know but-
Gaston: And that makes her the best. And don't I deserve the best?
LeFou: Well of course, I mean you do, but I mean...

Gaston: Right from the moment when I met her, saw her
I said she's gorgeous and I fell
Here in town there's only she
Who is as beautiful as me
So I'm making plans to woo and marry Belle

Bimbettes: Look there he goes
Isn't he dreamy?
Monsieur Gaston
Oh he's so cute!
Be still my heart
I'm hardly breathing
He's such a tall, dark, strong and handsome brute!

Belle: Is he gone?
Can you imagine? He asked me to marry him!
Me! The wife of that boorish, brainless...

No, sir!
Not me!
I guarantee it
I want much more than this provincial life!

The Disney Wiki has a collection of images and media related to Belle (song). 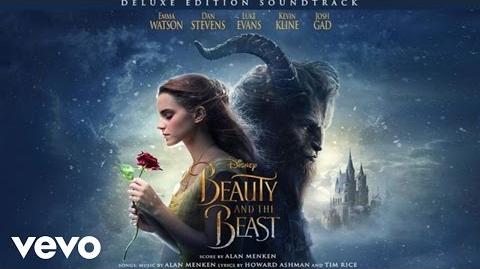