1975-present
Benjamin "Ben" Burtt, Jr. is an American sound designer, director, film editor, screenwriter, and voice actor, who is known for creating many of the iconic sound effects heard in the Star Wars, Indiana Jones, Alien, and E.T. the Extra-Terrestrial films, including the voice of R2-D2, the lightsaber hum, and the heavy-breathing sound of Darth Vader, where he also voiced them in the Star Tours attraction in the Disney Parks and its sequel, Star Tours: The Adventures Continue.

Ben Burtt also directed The Adventures of Young Indiana Jones: (Chapter 12) Attack of the Hawkmen and voiced the titular robot and M-O in the 2008 Disney/Pixar film, WALL-E. 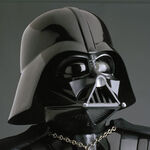 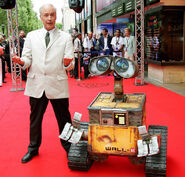 Ben Burtt standing next to a WALL-E statue at the film's premiere in June 2008.