Vivian and Georgette
Benjamin Scott "Ben" Falcone is an American actor, voice actor, comedian, director, producer, and writer. He is best known for working with his wife, Melissa McCarthy, on the films: Spy, Life of the Party, The Happytime Murders, The Boss, and Bridesmaids.

For Disney, Falcone is one of the additional voices in Gravity Falls, Big Hero 6: The Series, Big City Greens, Bizaardvark, and Tangled: The Series. He is set to appear in an undisclosed role in the upcoming 2022 film Thor: Love and Thunder. 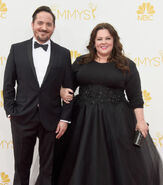 Ben Falcone visiting The Late Show with Stephen Colbert in May 2016.
Add a photo to this gallery

Retrieved from "https://disney.fandom.com/wiki/Ben_Falcone?oldid=4446280"
Community content is available under CC-BY-SA unless otherwise noted.