2
Paul Benjamin "Ben" Mendelsohn is an Australian actor, who first rose to prominence in Australia for his role in The Year My Voice Broke (1987) and internationally for his role in the crime drama Animal Kingdom (2010).

For Disney, he played Director Orson Krennic in the 2016 Star Wars spinoff film, Rogue One, Carey in The Efficiency Expert (aka Spotswood), a farmboy in Map of the Human Heart, Talos in the Marvel Cinematic Universe films Captain Marvel and Spider-Man: Far From Home, and voiced Killian in Spies in Disguise. 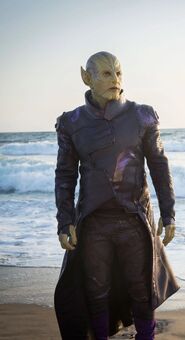 Killian
(Spies in Disguise)
Add a photo to this gallery

Ben Mendelsohn at premiere of Star Wars: The Force Awakens in December 2015.

Ben Mendelsohn at premiere of Rouge One: A Star Wars Story in December 2016.

Ben Mendelsohn at premiere of Captain Marvel in March 2019.
Add a photo to this gallery
Retrieved from "https://disney.fandom.com/wiki/Ben_Mendelsohn?oldid=3991025"
Community content is available under CC-BY-SA unless otherwise noted.