1988-present
Bennett Joseph "Ben" Savage is an American film and TV actor, comedian, screenwriter, and former child star of the late 1980s and 1990s. Savage is best known for his role as lead character Cory Matthews on the TV sitcom Boy Meets World from 1993 to 2000 and reprised his role in Girl Meets World in 2014. He is the younger brother of actor and comedian Fred Savage.

Savage was born in Chicago, Illinois, the son of Joane and Lewis Savage, who were an industrial real estate broker and consultant. His brother is actor/director Fred Savage, and his sister is actress/musician Kala Savage. His grandparents were Jewish and from Poland, Ukraine, Germany, and Latvia, and Savage was raised in Reform Judaism.

Savage made his film debut at the age of 9 in his brother, Fred's hit, Little Monsters (1989) and appeared in the feature films: Big Girls Don't Cry... They Get Even (1992), as Sam, the brainy little brother, and as a 10-year-old in Clifford (1994), the latter starring Martin Short. Savage's stage debut was in The Laughter Epidemic at the Pasadena Playhouse.

Savage established himself more prominently on TV. His first major speaking role on network television was playing the recurring role of Matthew, son of the Judd Hirsch character, on the comedy series Dear John (1988). Then he was one of a family of orphans who con Robert Mitchum into being their guardian in A Family For Joe (NBC, 1990).

Savage is best known for his role as lead character Cory Matthews on the TV sitcom Boy Meets World from 1993 to 2000. Cory Matthews 1990s-model Dennis the Menace, was constantly at daggers drawn with authority figures — especially his sixth grade teacher, Mr. Feeny (William Daniels). At age 13, Savage once said: "I'd never talk to my teachers like Cory talks to Mr. Feeny. I mean, they're the ones who give you the grades." When Boy Meets World (BMW) premiered in the fall of 1993, advertising agencies predicted that the clever Cory Matthews character would succeed. Indeed, the sitcom became a staple of the ABC's "T.G.I.F." Friday schedule. Along with Rider Strong, he is one of only two actors to appear in all 158 episodes of Boy Meets World (1993).

Savage's brother Fred appeared alongside him in one episode of Boy Meets World, guest starring as a lecherous college professor pursuing Cory's girlfriend. In the following season, December 17, 1999, Fred directed his brother and the cast of Boy Meets World in the episode "Family Trees," as Shawn (Rider Strong) discovers that the woman who raised him is not his biological mother. Ben has also worked in several TV-movies, including She Woke Up (1992) with Lindsay Wagner, and McDonald's Family Theatre Presents: Aliens for Breakfast (1995), as a young teen whose breakfast cereal figure comes alive. Savage received critical recognition for his portrayal of "Coty Wyckoff", an angel-faced boy with the soul of a killer, in the ABC Event Series, Wild Palms (1993).

In May 1998, Savage again received critical acclaim, this time for playing "Roddy Stern" in Tony Award-winner Israel Horovitz's rarely seen play Unexpected Tenderness at the Marilyn Monroe Theater. He received an Ovation Award for his performance.

In 2002, Savage starred in the PG-13 film Swimming Upstream playing the best friend who was slightly immature but very supportive to his terminally ill friend. Savage took a break from acting in both film and television for three years, but he later made a guest appearance in Still Standing as Seth Cosella, the boss of Bill Miller, played by Mark Addy. That same year he starred as Ford Davis in the independent feature Car Babes, which was shot on location in Los Gatos, California, and also guest starred as himself in an episode of the Disney Channel original series Phil of the Future. In 2006, he starred in the critically acclaimed independent film Palo Alto, which first premiered at the Tribeca Film Festival in 2007. In 2007, he starred in the ABC pilot from Sachs/Judah Making it Legal alongside Scott Wolf and Robert Wagner. In 2008, he starred as Mark Ratner in an episode of the NBC series Chuck, as well as murder suspect 'Kirby Morris' in an episode of Without a Trace.

In 2011, he appeared in an episode of the Fox series Bones. In November 2012, it was announced via his twitter account that he had signed on to the Boy Meets World spin-off series, Girl Meets World. He also played Stuart in the ABC TV show Speechless and young Jason Gideon in Criminal Minds. 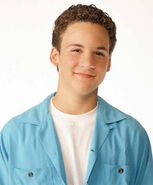 Ben Savage at premiere of Girl Meets World in June 2014.

Ben Savage speaks at the 2018 New York Comic Con.
Add a photo to this gallery
Retrieved from "https://disney.fandom.com/wiki/Ben_Savage?oldid=4262181"
Community content is available under CC-BY-SA unless otherwise noted.