Disney Wiki
Register
Don't have an account?
Sign In
Advertisement
in: People, Actors, People from New York,
and 33 more

Benjamin "Ben" Schwartz is an American actor, voice actor, comedian, writer, director, and producer. He is best known for his roles as a fictional version of himself in the comedy web series Jake and Amir, Jean-Ralphio Saperstein in the NBC sitcom Parks and Recreation, Leonardo in 2018's Rise of the Teenage Mutant Ninja Turtles and the movie of the same title, Clyde Oberholt in the Showtime comedy series House of Lies from 2012 to 2016, and Sonic the Hedgehog in the 2020 film of the same name and its 2022 sequel. He also voiced Skidmark in DreamWorks' 2013 animated film, Turbo and Bananar in The LEGO Movie 2: The Second Part.

For Disney, he voiced the title character in the Disney XD animated series Randy Cunningham: 9th Grade Ninja, Stuffy the dragon in the Doc McStuffins spin-off TV series The Doc Files, Dewey in the 2017 DuckTales reboot, and Rilo in the Tron: Uprising episode "The Renegade: Part 1". He was also a vocal consultant for BB-8 in Star Wars: The Force Awakens[1], and appeared as a guest in the Disney+ series, Earth to Ned. Schwartz portrayed George Buckman in Disney+'s 2021 Flora & Ulysses. He currently voices Lou Tarleton and his robot duplicate in Hulu's, M.O.D.O.K. 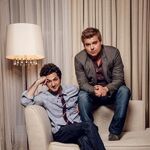 Ben Schwartz with Andrew Caldwell in May 2015.

Ben Schwartz behind the scenes of DuckTales.

Ben Schwartz speaks at the Viacom panel during the 2018 TCA Summer Press Tour.