2
Ben Wright was an English actor and voice actor, who voiced Roger Radcliffe in One Hundred and One Dalmatians, Rama in The Jungle Book, and Grimsby in The Little Mermaid. He also appeared in Way Down Cellar as Ethan Marcus as part of Walt Disney's Wonderful World of Color.

During the production of The Little Mermaid, nobody knew that Ben had provided the voice of Roger in One Hundred and One Dalmatians, and he had to tell them that he played the character. The role of Grimsby was the last role that he ever played before his death on July 2, 1989, from heart failure after having heart surgery at St. Joseph's Hospital in Burbank, California at the age of 74.

His other film appearances include The Sound of Music, My Fair Lady, Journey to the Center of the Earth, Judgment at Nuremberg, Mutiny on the Bounty, The Fortune Cookie, Topaz, The Diary of Anne Frank, and the narrator of 1963's Cleopatra, where like much of his film work, he went uncredited.

His television credits include My Three Sons, Hogan's Heroes, Get Smart, Bonanza, Gunsmoke, The Wild Wild West, The Twilight Zone, The Tab Hunter Show, Voyage to the Bottom of the Sea, The Monkees, Alfred Hitchcock Presents, Dragnet, The Virginian, Perry Mason, Mission: Impossible, and The Addams Family.

Roger Radcliffe
(One Hundred and One Dalmatians) 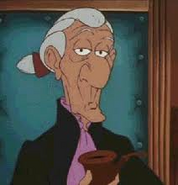 Grimsby
(The Little Mermaid)
Add a photo to this gallery
Retrieved from "https://disney.fandom.com/wiki/Ben_Wright?oldid=4523296"
Community content is available under CC-BY-SA unless otherwise noted.