2
Benjamin George Bratt is an American actor and model who is best known for his role as Reynaldo "Rey" Curtis from the TV series Law & Order. He also voiced Manny in Cloudy with a Chance of Meatballs and its 2013 sequel (notably having more speaking lines in the latter film), as well as Eduardo "El Macho" Pérez in Despicable Me 2.

For Disney, he played Paco in the 1993 Hollywood Pictures film, Blood In Blood Out, Felix in One Good Cop, and Jonathan Pangborn in Doctor Strange. He also voiced Ernesto de la Cruz in the 2017 Disney/Pixar film, Coco. He currently guest stars on ABC's Modern Family as Javier Delgado. 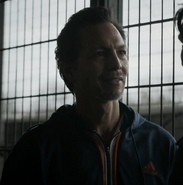 Benjamin Bratt at premiere of Doctor Strange in October 2016.

Benjamin Bratt speaks at the Star panel at the Fox portion of the 2017 Winter TCA Tour.

Benjamin Bratt behind the scenes of Coco.

Benjamin Bratt at premiere of Coco in November 2017.

Benjamin Bratt arriving at the 90th annual Academy Awards in March 2018.
Add a photo to this gallery
Retrieved from "https://disney.fandom.com/wiki/Benjamin_Bratt?oldid=4270970"
Community content is available under CC-BY-SA unless otherwise noted.