Benjamina Gunn was portrayed in Muppet Treasure Island by the famous character Miss Piggy. When we first meet Benjamina, she has been living on an island with tribal pigs as their queen. She was marooned there by Captain Flint years ago along with his treasure, which she enjoyed caring for. Events take a turn for Benjamina upon the arrival of a ship captained by an old fling, Abraham Smollett.

Benjamina is especially attracted to sailors, as we learn that in addition to Smollett and Captain Flint, she also took up with Long John Silver.

In the Muppet adaptation of the Treasure Island story, Benjamina Gunn is an altered version of Robert Louis Stevenson's original character, Ben Gunn.

Miss Piggy in an interview about her role as Benjamina Gunn 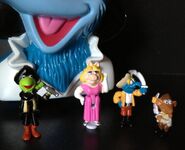 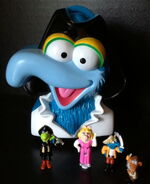 Add a photo to this gallery
Retrieved from "https://disney.fandom.com/wiki/Benjamina_Gunn?oldid=2802850"
Community content is available under CC-BY-SA unless otherwise noted.